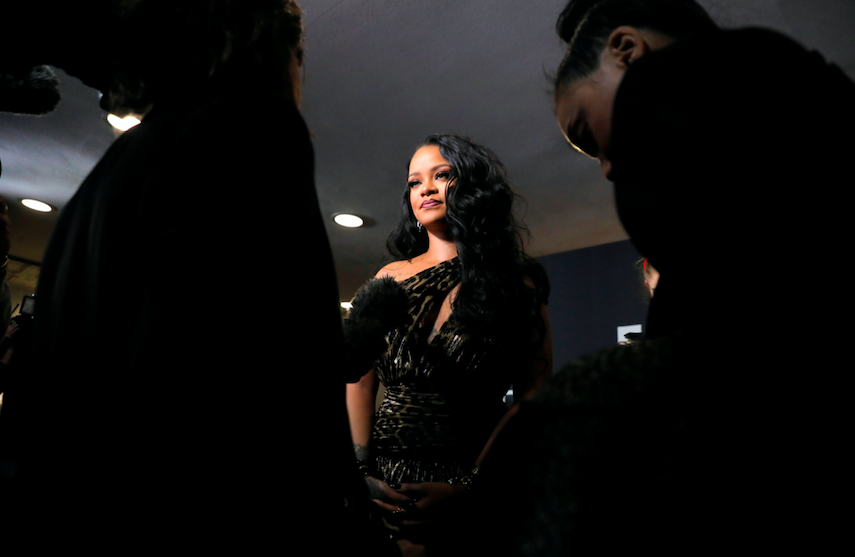 Music icons Rihanna and A$AP Rocky are not really doing a good job convincing fans that they are not dating.

The "We Found Love" singer recently hit the town at The Nice Guy in Los Angeles on February 10. It was reported that A$AP Rocky joined her.

The pair arrived at the Los Angeles hotspot at the same time but walked inside separately. The Barbados babe showed up at 1 AM, while the rapper followed behind just after 2 AM.

It is so evident that they are both there to see each other.

TMZ reported that neither one of them was in the mood to talk about their relationship status.

Rihanna wore a golden yellow hoodie dress with high heels and a pair of sunglasses, while A$AP Rocky was wearing a relaxed yet casual sweater, varsity jacket and joggers.

Their not-so-subtle meet up comes after speculation that the two have started dating following the Fenty Beauty mogul's split from Saudi billionaire Hassan Jameel.

Rihanna started dating the Hassan in 2016 and kept their relationship private, making just a few public appearances together. But last month, it was reported that the couple had gone their own ways.

Since their split, Rihanna was seen with A$AP Rocky backstage at the 2020 Yams Day Benefit concert, with rumors circulating that they were together.

The two first started bonding over designer goods in the rapper's 2013 music video for "Fashion Killa," and since then, people were rooting for them to link up for years.

Last year, the two have walked the red carpet together at the British Fashion Awards, and the fantasy was further fueled up.

According to The Sun, they even shared a hotel suite during a trip in New York. However, Rihanna is reportedly reluctant to put a label on what they have since it was too soon and she just broke up with Jameel.

"They're really enjoying each other's company and taking things easy as it's still early days," the source of The Sun said.

Despite this, some have pushed back against the rumors.

Hollywood Life reported that there is nothing romantic going on between the duo. According to their source, "Rihanna is good friends with Rocky. They've met up many times over the past year to hang out, but since she's single, people are paying attention to it now and looking to turn it into something more.

"They are very good friends and will continue to be. She isn't interested in another relationship right now."

Aside from A$AP Rocky, singer-rapper Drake has also been linked with Rihanna.

On Jan. 22, the 33-year-old "In My Feelings" singer was pictured standing next to Riri at Rocky's concert at Yams Day. PopCrave obtained a 1-second clip of the two standing near each other while they watched their friend perform at an exciting crowd.

It's not known, at that time, whether the pair arrived together or if they had even had any interaction during the concert.

Despite sparking dating rumors, a source told Page Six that the two were not dating.