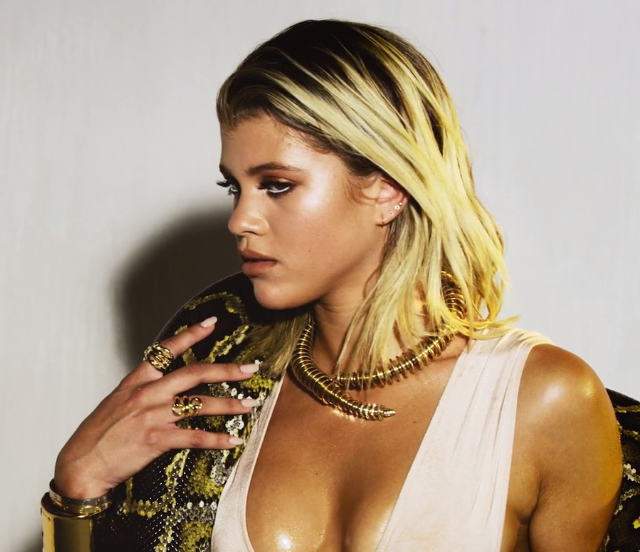 Aside from her dating life, Sofia is trying to become a successful actress.

Her dad, singer-songwriter Lionel Richie shared a bit of unfatherly advice to her daughter on her budding career.

Speaking to Us Weekly, the "American Idol" judge said, "I told her, I said, 'I wish you lots of failure young. We're in a business where it's how you recover, and 'yes, yes, yes' does not feel terrible, so you have to get smacked in the face."

The blonde model's father said it not be mean, but he just wanted his daughter to learn how harsh the entertainment industry can be.

The 70-year-old father added, "I said, 'You're going to have a little bit more of a different time because you're coming from a family where they expect a little more."

He said of Sofia, "She's got attitude. She sings too. I'm excited about her. They're all taking chances, and I want them to do it now."

Lionel also recalled a sad, yet terrifying moment when Sofia's sister, Nicole, auditioned for a talent show at four years old saying when she was about to go on her "little act," the casting director said, "And now we have Lionel Richie's daughter," which made her froze and asked told him that she "doesn't want to be here."

The "Dancing on the Ceiling" singer also shared a story about his daughter Nicole Richie struggling at the beginning of her career and that he helped her because of his worldwide fame.

Lionel Richie admits that he tells his children to always "do your best, give them attitude and kill it."

However, his advice doesn't go beyond his career. Lionel explained he steers clear of his children's personal lives, saying, "You can't step in there. It just doesn't work. If you're a parent, you'll understand."

Kourtney admires Sofia's maturity and the lovely way she treats their children.

Kourtney even said that she feels Sofia "brings out the best" in her now ex-boyfriend and that her presence has only strengthened their co-parenting relationship.

Kourtney also appreciates how Scott and Sofia never make her feel like she's the third wheel, telling her sister Khloe, "They don't make me feel like I'm left out, which is nice. Or else I wouldn't go or invite her to come."

Despite Scott is a regular on "Keeping Up With the Kardashians," Sofia revealed she would not appear in the upcoming series of the show.

She told Entertainment Tonightshe was sitting out in the show saying that "I held back on things because I was afraid of failure, but 2020 is the year of no fear! I'm going to be doing acting stuff soon."

Last week, Sofia quietly unfollowed Kourtney Kardashian on Instagram. Sofia is not only close to Scott, but also close friends with Kylie Jenner.

An insider told People Magazine, "As much as people would love there to be, there isn't any drama between Scott, Sofia, and Kourtney."

So it's probably nothing.

READ MORE: [PHOTOS] Enrique Iglesias Surprises Everyone With Baby No.3!