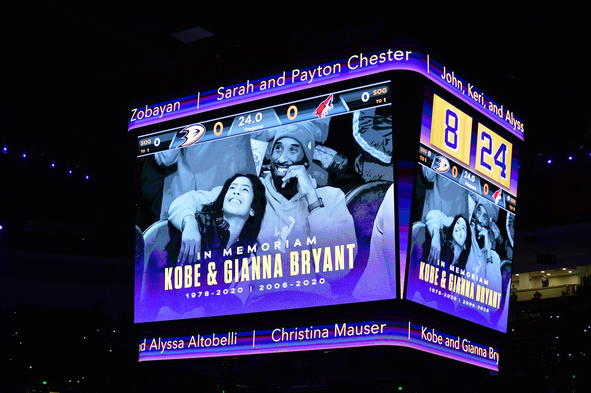 On February 24, 2020, the world tuned in on television to celebrate the life of basketball legend Kobe Bryant and his daughter Gianna Marie. The televised memorial service held at Los Angeles' Staples Center drew a lot of emotions from mourning family, friends, and supporters of the so-called "Black Mamba."

A few months after, Jimmy Kimmel looked back at the moments while hosting the most heartbreaking memorial service in history.

Speaking in the virtual episode of "Watch What Happens Live," host Andy Cohen asked Kimmel how it felt like hosting a televised memorial service of an NBA superstar and how intense or nervous he was during the experience.

The 52-year-old host revealed that at first, he did not realize the memorial service was televised. He then described the feeling as "very and very."

"I guess I wasn't really fully paying attention, but I didn't know it was going to be a televised event. I thought it was a somewhat intimate family and fans thing," Kimmel explained.

Kimmel, who is also a good friend to Kobe, revealed that the most devastating part was seeing Kobe's mourning family.

"The saddest part was seeing the family just sitting in the front row. That's a killer, looking at those kids, Vanessa and Kobe's parents. To just realize as sad as this is for all of us, this is a million times worse for them," he continued.

The day after the memorial service, Kimmel went on with his show without a studio audience to honor Kobe. The host explained that pushing through a comedy show didn't feel right after mourning the death of his good friend.

During his opening monologue, Kimmel opened up about his feeling towards the sudden and tragic death of Kobe Bryant.

"Kobe was - and I know this might not make sense - but he was just the last person you could have ever imagined something like this happening to," Kimmel said.

"He was so strong and handsome and smart and energetic - he was a hero," he added.

Over 20,000 people gathered in and outside the Staples Center to pay their last respect to Kobe and his 13-year-old daughter Gianna during the meorial. It featured emotional speeches from the Lakers' superstar's wife, Vanessa Bryant, and Kobe's fellow NBA legends Shaquille O'Neal and Michael Jordan.

Kimmel also got emotional during his speech and described the memorial service as a sad day but also a celebration of life.

It was on January 26 when Kobe and Gianna died in a tragic helicopter crash, along with seven other passengers.

The crew is on their way to a basketball tournament for Kobe's very own "Mamba Academy," where he served as the coach to his daughter's team.