TikTok Video: Debby Ryan Wins the Internet With 'What I'd Wear' Video!

Debby Ryan took a trip down the memory lane and channeled some of her iconic characters on Tiktok.

The Alabama born actress joined a slew of celebrities who caved in to the the video-sharing app and broke the internet with her version of the #WhatIdWear trend.

In the video, the 27-year-old former Disney star gave her fans major nostalgia, as she recreated her roles from her 2011 series "Jessie," "The Suite Life on Deck," "Radio Rebel" and Netflix's "Insatiable."

She also took a swipe at U.S. President Donald Trump with her captions: "The president said to make a TikTok," in reference to his threat to ban TikTok in America. 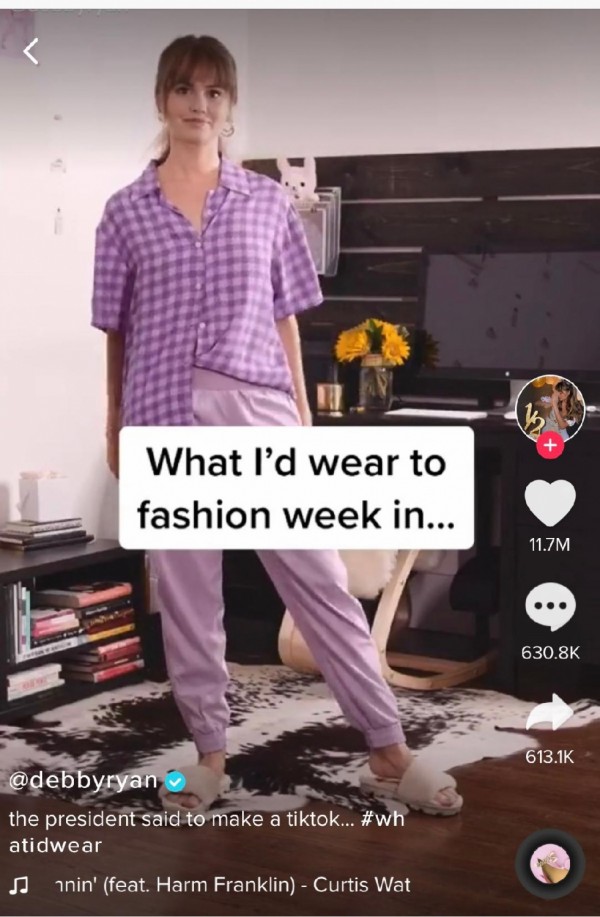 Debby Ryan began her video by sporting a lilac loungewear paired with cozy slippers. She then transformed as the Texan Jessie Prescott wearing a green buttoned-down shirt, printed grey skirt suit, and black knee-high boots capped off with a bold burgundy lip.

In her second look, she dressed up as the intelligent Bailey Pickett on "The Suite Life on Deck," wearing a casual white crop top, red shorts and slip-on sneakers while donning a big wavy hair.

Seconds later, the Disney alum transformed to her role as the vengeful teenager Patty Bladel from her hit comedy-drama series"Insatiable."

She wore a long-sleeved pink dress, white sneakers and a crown while holding a bloody weapon -- a nod to her character as a pageant queen-turned killer.

As of this writing, the viral Tiktok video has gained 42.8 million views and 11.2 million likes.

Of course, this sparked social media frenzy, as her fans flocked to Twitter to give her a tap on the back for doing her own Tara Adam's meme

"The way Debby Ryan is the first person to acknowledge their own meme and not kill it...her power," one user wrote.

Another fan pointed out how the Disney alum was hilarious in her last Tiktok scene.

"Debby Ryan has Tiktok and she did THE thing."

Debby Ryan as an Internet Meme

Prior to her recent entry on the video-sharing app, The "Riptide" star has been an internet meme lately after her old clip from "Radio Rebel" resurfaced, all thanks to her iconic facial expression.

Social media became obsessed and recreated tons of memes about it.

On the other hand, Debby Ryan jokingly mentioned on Twitter that she is "serious about her craft."

"I was serious about my craft from a young age and studied technique alongside Roxanne from A Goofy Movie."

Debby Ryan is making a bigger name for herself with her new gig.

Debby Ryan Dishes On Transition From Actress To Producer

Debby Ryan opened up on going from acting to producing in the new film 'Jessica Darling's It List.'

Debby Ryan seemed to have herself a fulfilling Father's Day this weekend.

Debby Ryan has expressed her thoughts regarding the sexual abuse incident at Stanford University.

Debby Ryan Delivers Words Of Wisdom On What Every Relationship Needs

Debby Ryan is keeping up with her inspirational comments on social media.

Happy Mother's Day to the woman who brought the one and only Debby Ryan into the world.

Alyson Stoner Defends Debby Ryan's DUI Incident, 'It Could Have Been Anyone'

Debby Ryan has someone defending her following her DUI arrest earlier this month.

Debby Ryan has commented on her recent scandal.

Debby Ryan Opens Up On Being An Inspiration For Young Women

Debby Ryan opened up on being one of the most inspirational young celebrities towards women.