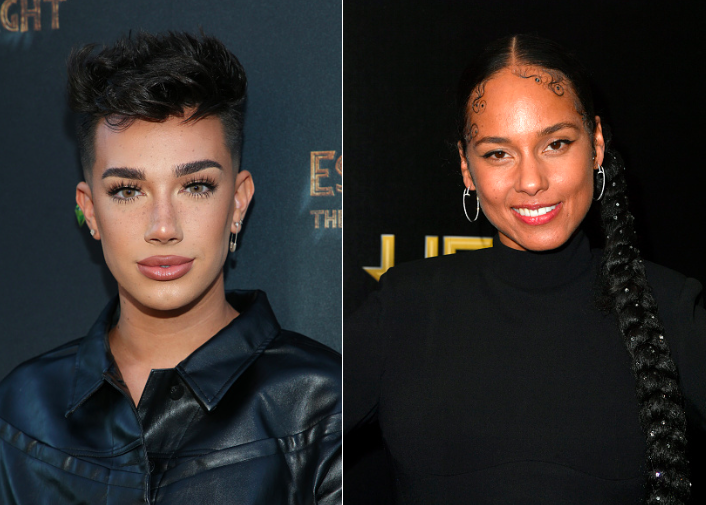 YouTube celebrity James Charles is once again facing some backlash for his recent comments about singer-songwriter Alicia Keys.

The "If I Ain't Got You" hitmaker adds "beauty mogul" to her list of talents.

Keys is partnering with ELF Cosmetics to create a skincare line, and it will be launched in 2021.

In a press release, their collaboration with the Grammy-winning performer will provide "an authentic voice, and a line of skin-loving, dermatologist-developed, cruelty-free products."

"A culmination of Keys' skincare journey and her passion for bringing light into the world, this new lifestyle beauty brand will enable Alicia to explore further conversations about inner beauty, wellness, and connection."

The brand's CEO and Chairman Tarang Amin said in an interview, "She's been wanting to do something in lifestyle and wellness for quite some time."

While there's no announcement of what the name of the line is going to be, YouTube sensation James Charles voiced his opinion upon learning about Alicia Keys' beauty news.

Manny MUA and James Charles are bothered that Alicia Keys is coming out with a beauty brand with Elf Cosmetics - it’s a skincare line with likely every day cosmetics - hey boys - not all women want caked on makeup. Alicia is a Queen. Please take a seat jealousy doesn’t suit you pic.twitter.com/F2CCEW3Ykn — Without a Crystal Ball (@woacbofficial) August 5, 2020

In a now-deleted tweet, he said, "People who do not wear makeup should not be coming out with makeup brands."

Twitter users, however, corrected the LGBTQ beauty influencer and told him that Keys was not coming out with a makeup line, but a skincare line instead.

One Twitter user said, "why are james charles shading alicia keys when his white friends who don't wear makeup are also launching makeup lines. also she is wanting to do skin care, but nevertheless that doesn't change this situation all. leave black women alone you creep."

Another one said, "How does manny and James Charles shade Alicia keys aka a black woman for starting a makeup brand and at the same time say they are excited for Selena Gomez makeup company to start .... like make it make sense."

When the hate was getting too much, James Charles immediately posted a screenshot apology on Twitter saying he felt "childish" for indirectly tweeting Alicia Keys.

"A few years ago, she announced that she no longer would wear makeup, so I was bothered because many celebrities come into the beauty space as a cash grab without any actual passion and then leave."

He added, "I deleted the tweet after a few mins because it's childish to indirect tweet someone & I am not the gatekeeper of makeup."

Saying that he just found out it was going to be a skincare line, he "deleted" the tweet "because after reading further, I learned that the beauty line is SKINCARE."

It wasn't just James Charles who got a lot of heat.

He tweeted, "does anyone else get slightly irritated when celebs come out with entire makeup lines? especially when those celebs don't even wear makeup... i'm like girl."

But he also apologized to the singer for jumping the gun with his tweets and not knowing the facts as well.

"I only tweeted because I know that she stopped wearing makeup years ago, but I should have researched more to discover that she is working with e.l.f. cosmetics to develop SKINCARE."

In 2016, Alicia Keys swore that she would stop wearing makeup.

Writing on LennyLetter.com, she revealed the real reason for quitting makeup.

"I don't want to cover up anymore. Not my face, not my mind, not my soul, not my thoughts, not my dreams, not my struggles, not my emotional growth. Nothing."