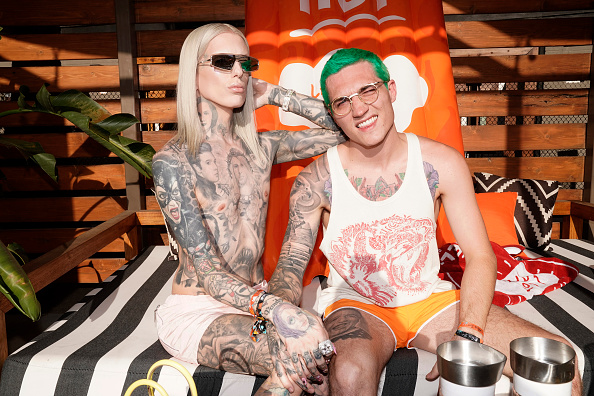 It looks like YouTube sensation Jeffree Star found love in the middle of a hopeless global pandemic. In a recent Instagram post, the beauty vlogger low-key revealed that he is now out of the single's society.

In the photo, Jeffree is engaged in a steamy pose with a mysterious man. The YouTube star is sitting on the man's lap while donning a Louis Vuitton overalls.

"Thankful for all the blessings God has brought into my life this year," Jeffree wrote.

View this post on Instagram
Thankful for all the blessings God has brought into my life this year A post shared by  Jeffree Star (@jeffreestar) on Aug 22, 2020 at 3:13pm PDT

Jeffree may have covered the anonymous guy's face, but the details on his arms are enough for lurking fans to investigate his identity.

A few hours after the controversial IG snap, it was revealed that the mystery guy is a basketball player, paying for a team in Germany.

The popular Instagram gossip page "The Shade Room" was first to reveal Jeffree's lover's identity. The detailed arm-tattoo led them to conclude that the mystery guy is André Marhold.

While some social media users raised concerns that "The Shade Room" may have accidentally outed the guy's sexual preference, the 34-year-old beauty guru seem not to mind, he started posting selfies with Marhold hours after the revelation.

View this post on Instagram
#PressPlay: Whew! We found the man that #JeffreeStarr was posted up with, and he’s a professional basketball player overseas, y’all! (SWIPE) A post shared by  The Shade Room (@theshaderoom) on Aug 24, 2020 at 7:05am PDT

Because of this, Jeffree Star became an instant trending topic on Twitter as people shared their thought about his new lover boy.

One particular tweet from Marhold's alleged ex-girlfriend caught the attention of Twitter users and sparked a controversy that Jeffree's new relationship involves money-scheme.

"My ex on the shade room for fucking Jeffree Starr is not how I planned to start my day," the Twitter user @ghostfecelo wrote.

Although it was not confirmed she and Marhold dated in the past; the Twitter user suggested that her ex is receiving money from the content creator.

"I'm not embarrassed just crazy what people do for money," the ex added.

The alleged ex's comment sparked theories that Jeffree could just be paying the guy to pretend as his new lover.

My ex on the shade room for fucking Jeffree Starr is not how I planned to start my day. — Lo (@ghostfacelo) August 24, 2020

The "paid lover" controversy reached the cosmetics mogul's attention and did not think twice to clap back. However, he seems to be directly addressing Marhold's ex-girlfriend who suggested the idea of paying the guy and pretend as his boyfriend.

"I know it's devastating news for some people, but I don't give money to anyone I'm dating or anyone who is f*cking me. Work on your own insecurities, sis. I'm not the problem," Jeffree wrote.

"Worry about how to pay your own bills, not who's in my mouth," he added.

I know it’s devastating news for some people, but I don’t give money to anyone I’m dating or anyone who is fucking me. Work on your own insecurities sis, I’m not the problem — Jeffree Star (@JeffreeStar) August 24, 2020

But Marhold's ex is ready to give a fight. Re-tweeting Jeffree's statement, she once again dropped a bombshell against the new guy.

"Well, you should tell the people you're f*cking not to send me sexual videos from your home.

And I'm not your sis...not sure you're the same species," @ghostfacelo added.

Well you should tell the people you’re fucking not to send me sexual videos from your home. And I’m not your sis...not sure you’re the same species. https://t.co/MHuvAKVt3f — Lo (@ghostfacelo) August 25, 2020

In a vlog entry in January 2020, Jeffree confirmed the split up saying that they both want to spend 2020 by focusing on themselves.