The music video was shot in 2017, and in its bizarre theme, it appears that the older Kardashian sister has given birth to her youngest sister.

Kim Kardashian and Kylie Jenner left little to the imagination with their barely nude outfits in the never-released "Feel Me" music video by Kanye West and Jenner's ex-boyfriend, Tyga.

At the time that this was filmed, Jenner was still dating the rapper. However, it only saw the light of day on Wednesday when fans could lay ice on this "masterpiece."

According to reports, this leaked music video that features two of the famous Kardashian-Jenner members cost a few million dollars to make.

Kylie Jenner and Kim Kardashian paraded around in almost-naked outfits and stripper high heels while a Calabasas monster struck cruised around.

The sisters sported blonde hairs, unlike their usual brunette and natural hair colors.

However, the Kylie Cosmetics creator's most dramatic transformation is that she wore a platinum blonde pixie wig, which looks exactly like her mom, Kris Jenner's hair. 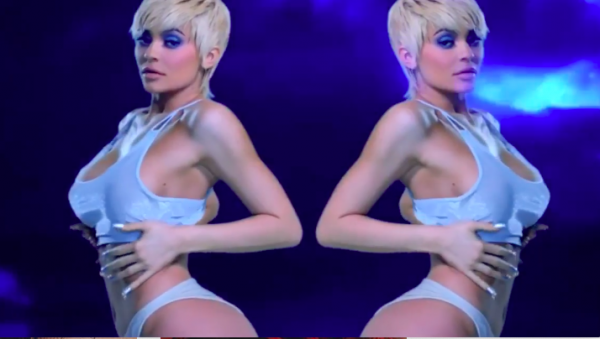 Kylie Jenner was able to lean into the leaked music video's highly sexualized vibe, which is moody and dark. Thanks to her skimpy outfits, her ample assets were shown off as she does some movements. 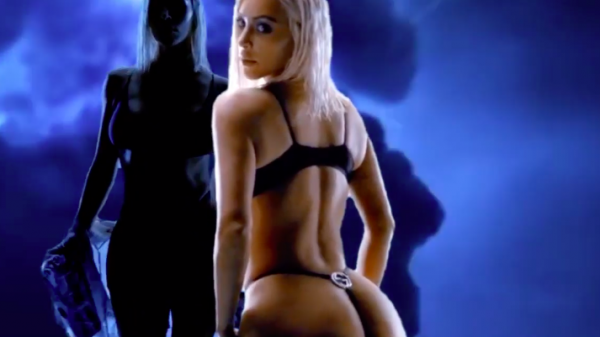 On the other hand, Kim Kardashian was also almost nude wore a matching bikini top paired with a risqué and barely there black G-string, which accentuated her voluptuous backside.

Most of the sisters' movements looked like endless squats that were slowed down.

However, at the end of the video, the most disturbing scene of all is when a giant Kim Kardashian sat with her legs spread wide open while a door opens where her cooch would be.

That exact moment was seemed to be stylized as something of a deity with angel wings that floated behind her.

The door opens, and in a blinding white light came an almost-naked Kylie Jenner. While it may seem like Jenner gave birth to herself, the director confirmed that it was Kardashian. 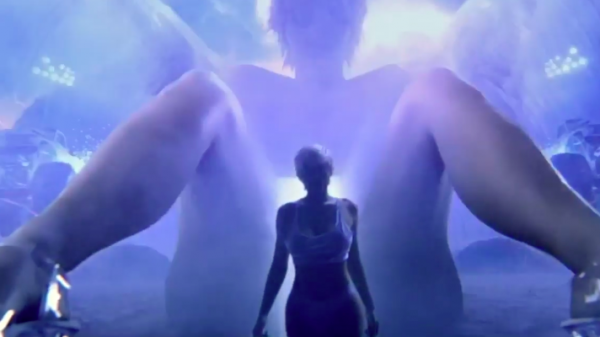 Eli Russell Linnetz, the director of the "Feel Me," told E! News, "It features Kylie coming out of Kim's v----a. the symbolic meaning is that there would be no Kylie without Kim."

This is in reference to the enormously famous Kardashian-Jenner clan that they wouldn't be where they are now if it weren't for Kim.

It was even referenced in one of the episodes of "Keeping Up With the Kardashians," where Kim Kardashian told her older sister Kourtney that she gave her "a f-----g career."

He further told E! News on Wednesday that Tyga and Kylie Jenner's romance fizzling became the reason why the music video was not released at all.

"The video was shot over five months but was never released because Kylie and Tyga broke up."

For years, the director has been working with Kanye West that he even directed his songs "Famous" and "Fade." Aside from West, he was able to work as a creative director for Lady Gaga.