Khloe Kardashian sparks pregnancy rumors once again after fans of the reality star noticed a baby bump on her latest Instagram picture.

The mom-of-one shared a snap wearing a sheer, loose-fitted dress with the sunset on view, which immediately prompted followers suspicion that she's expected a second child with her on-again, off-again beau, Tristan Thompson. 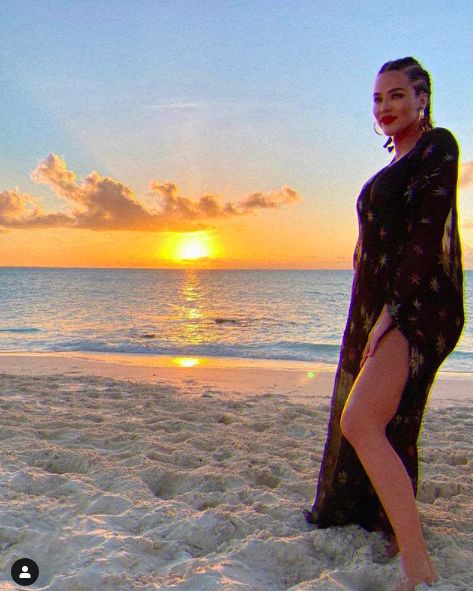 One follower stated, "I see a baby bump," while another one commented, "She's pregnant again."

The 36-year-old "Keeping Up With the Kardashians" star has recently gotten back with her serial cheater boyfriend after playing "happy family" at home with him and their two-year-old daughter True at her California mansion.

News of them spending the quarantine lockdown together prompted that the two have gotten back together, and reports later have been confirmed - they are back together.

The Good American creator is yet to confirm the swirling pregnancy speculation on her page.

If Khloe Kardashian is indeed pregnant, she'll surely give the second child the same love and support she gives True.

According to Us Weekly, Khloe has been super involved in her toddler's life.

A source revealed, "Khloe is very emotionally and healthily supportive as a mom."

"She is very communicative and always tries to set the best example for True to live by - mentally, emotionally, and spiritually."

In 2018, the reality star became a mother to True, and her arrival came three years after Khloe shared her desire to become a "fun parent."

"I like to have fun and be silly and not take myself too seriously with the kids, so I hope that will translate when I actually have my own."

After welcoming her daughter, she explained in a 2018 blogpost how tired being a new mom was.

"You know that babies are so helpless, and they rely on you for everything."

"Something takes over, and you find the energy to care for this helpless precious baby. You find this energy and patience for your child."

The 29-year-old basketball star is said to be happy to spoil his daughter.

Another source told Us Weekly, "Tristan often spoils her like she is daddy's little princess. He wants her to live her very best life in more ways than one."

Spotted on the two-year-old are just some designer pieces from her parents, including a diamond bracelet with matching earrings, and designer clothing from Burberry.

Even though Tristan has a three-year-old son from an earlier relationship, he admitted that he treats his two kids differently.

"But it's like, 'True, it's going to be okay, you know? We're right here. Daddy's here to feed you. It's me!' Raising a girl is way different, but it's fun, though. It challenges you."

As for Khloe Kardashian and Tristan Thompson's relationship, not everybody is happy that they're back together as many fans believe he will only cheat on her for the nth time.

READ MORE: Gigi Hadid Pregnancy Cravings: The Extreme Measures She Had To Do To Satisfy Herself