Fans of Zendaya and Jacob Elordi are rejoicing,

Finally, Elordi congratulates Zendaya on her Emmy win for Outstanding Lead Actress in a Drama.

The achievement makes the 24-year-old the youngest actress ever to win the category, and the second Black celebrity to bag the award, after Viola Davis' win in 2015.

"The Kissing Booth" star took to his Instagram Stories and posted a picture of Zendaya in character as Rue in the hit teenage drama show, "Euphoria." 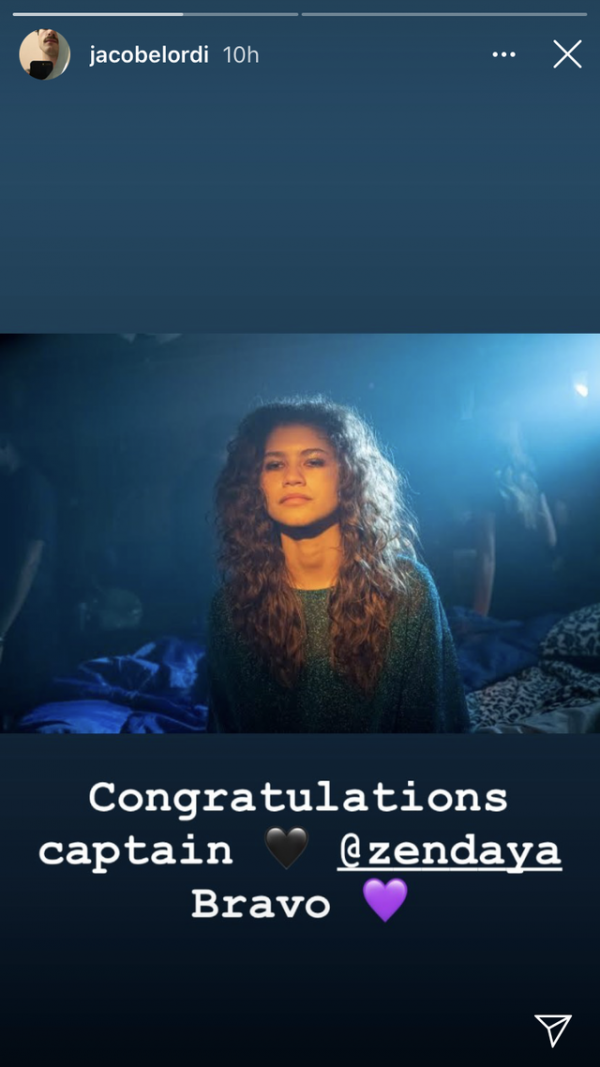 The text on the photo said, "Congratulations captain. Bravo," along with two heart emojis.

News of Jacob Elordi honoring Zendaya came after news that he cheated on her for model Kaia Gerber.

Though Elordi and Zendaya didn't confirm they were in a relationship, the two have been the center of romance rumors after being spotted holidaying in Greece together in 2019.

They were also seen getting cozy and in a subtle PDA during a stroll in New York in February 2020, and later went shopping in Los Angeles together.

A tipster told E! News at that time, "Jacob and Zendaya have been seing each other for months now. They started as close friends but it became romantic after their show ended."

The source further claimed that the rumored couple have been "inseparable" since last summer and even tried to make time for each other in between their projects.

But in an interview with GQ after they were spotted, Jacob Elordi said that Zendaya is "like my sister," which crushed a lot of fans.

"She's an incredible artist and a very caring person to all of us. But we're all really close."

On the other hand, Zendaya called the Australian hunk her "best friend" when she presented him the Rising Star Award during the American-Australian Association Arts Awards.

However, recently, Elordi has been sparking relationship rumors with Cindy Crawford's daughter. They were seen having dinner in Malibu and now, he went to Mexico with Gerber and her parents.

A source told Entertainment Tonight, "They've been spending a lot of time together and seem super happy."

The Disney alum's win was extremely impressive after beating out her competitors for the coveted award.

Zendaya plays Rue, a teenager who spent her summer in a treatment program to get sober as she goes back to school.

Jacob Elordi is also part of the show who plays a jock named Nate Jacobs, who oftentimes clashed with Rue and her best friend, Jules, played by Hunter Schafer.

On Sunday night, Zendaya still seemed to be on cloud nine after her Emmy win, expressing her gratitude and for all the support.

"So grateful, still speechless, to all my friends and family who texted/tweeted/called," she said.

"I promise I will get back to you tomorrow when I've wrapped my head around this amazing night, until then, gonna go sleep and make sure this isn't a dream."

"Euphoria" only has one season for now, but it has been renewed by HBO for a second season. Production was due to start in spring, but it got delayed because of the pandemic.

However, it has been recently revealed that the second season will not start filming until 2021.

Following Zendaya and Tom Holland's recent steamy car smooch, many fans chimed in and share hilarious memes about Nicki Minaj and the actor, but is it true that they had a relationship in the past?

"The Spider-Man: No Way Home" co-stars have denied every rumor that emerged about them dating each other ever the movie was released back in 2017.

New photos from the "Spider-Man: No Way Home" set confirmed Zendaya's return to the franchise.

The cast of "Spider-Man 3" shared new images on their respective Instagram accounts.

There have been reports going around that Drake gifted bags of money to guests of the "Euphoria" wrap party. Now, Zendaya sets the record straight.

It hard to ascertain who became Zendaya's boyfriend, but there are some big-name stars who have been linked to her over the past few years.

The 72nd Primetime Emmy Awards made history as the first-ever award-giving body to conduct a virtual ceremony.

Is Kaia Gerber still hung up on Cara Delevingne?