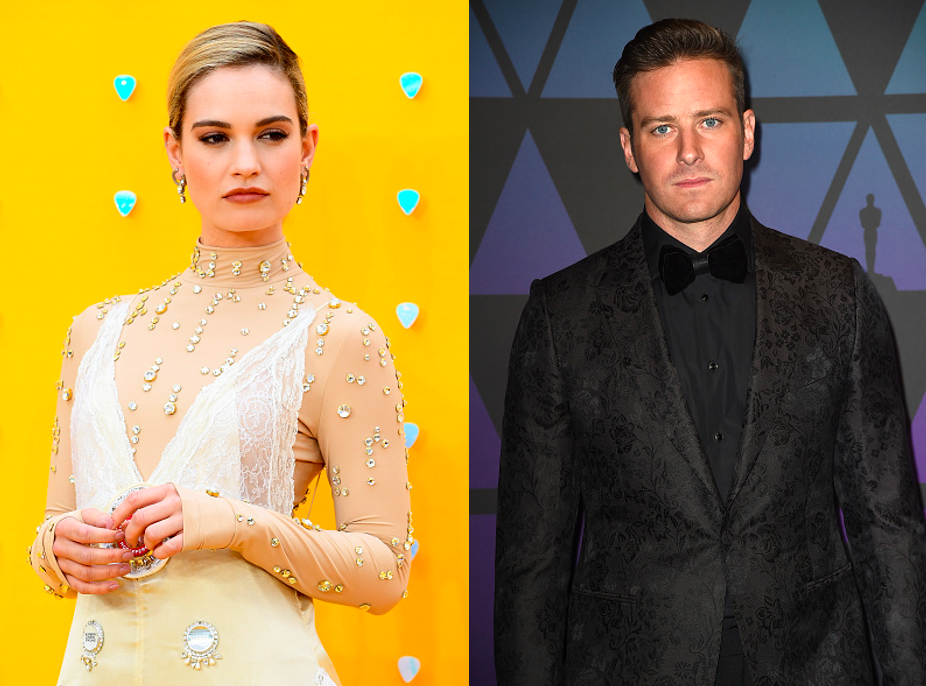 The British actress reportedly grew closer to her co-star Armie Hammer as they filmed for the Netflix movie "Rebecca."

It reportedly caught the eye of Armie's future ex-wife, Elizabeth Chambers. They were married for ten years. But in July, they have decided to split.

Armie and Lily played Mr. and Mrs. De Winter in the 1938 adaptation of the Daphne du Maurier novel.

Sources revealed to The Sun on Sunday that they have seen the two stars formed a close bond on set.

According to the crew, Lily James and Armie Hammer saw how the pair "behaved as if they were a couple" as they filmed scenes in the picturesque South of France.

As they filmed in France and the UK, sources said that the "Call Me By Your Name" actor was also "open about his marriage being on the rocks."

Sources also told the outlet, "She and Armie were close and spent a lot of time together in the evenings and at weekends."

Insiders also told Mail Online that Lily James was seen flirting with Armie Hammer even though the "Downton Abbey" star knew she was happily married to Elizabeth with two kids.

During their filming, Lily's relationship with her boyfriend, Matt Smith, has started to die down.

Observers told The Mail that they've noticed how "smitten" Lily seemed the moment she laid eyes on her co-star.

An insider revealed, "She was not subtle. And he was into it, no doubt about it. She was touching him constantly, giving him long-smoldering looks."

However, things between Armie and his wife started crashing down when she found passionate messages between her husband and a woman named "Adeline," as per the insider.

Armie also had a number saved in his phone under the same name.

According to The Mail, Adeline is the same name Lily James used on set.

Elizabeth was said to have been "devastated" by her discovery, which sparked a downward spiral that ended their marriage.

Armie also said to have accidentally sent his wife a raunchy text that was supposed to be for another woman.

The insider explained, "Elizabeth was devastated, heartbroken. But she wasn't about to throw away her marriage for one indiscretion."

"She is an amazing woman. She doesn't deserve this," the insider added. "You couldn't ask for a more stunning devoted wife, and she's a great mom to their two little ones."

But Lily James wasn't just dragged into the scandal with Armie Hammer and Elizabeth Chambers.

The entire thing was initially from Lily's photos with her "The Pursuit of Love" co-star, Dominic West.

The pair were pictured having a steamy kiss in Rome, Italy, where they're filming for their mini TV series.

The twist is that "The Affair" actor is still married to his wife of ten years, Catherine Fitzgerald.

A day after the PDA photos of Lily and Dominic were leaked, he and his wife presented a united front by kissing in front of reporters outside their home in England.

According to a source who spoke to E! News, Lily is embarrassed by the entire debacle.

"She's mortified and embarrassed by the entire thing," the source shared.

"She was shocked when she saw the photos and the story that he is happily married.

"She wants it all to go away and is just laying low, hoping it will pass quickly."