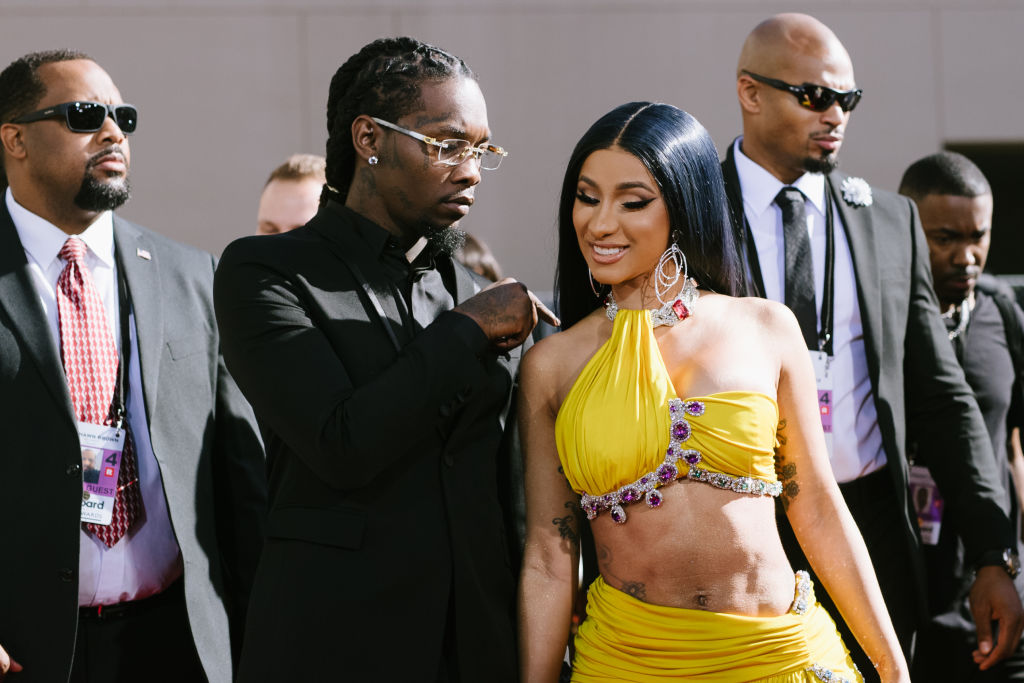 Cardi B just made a huge revelation about Offset and his collection.

The "WAP" hitmaker recently shared a glimpse inside her Atlanta mansion that features amazing and interesting decors.

Over her Instagram Stories, the Grammy Award winner showed off her six-acre property that boasts four bedrooms, seven bathrooms, a four-car garage and a wine cellar.

Not only that, but Cardi's jaw-dropping mansion also displays incredibly tall windows, high ceiling, an impressive fireplace and surprisingly, a gun range with steel walls.

Aside from these, the "Bodak Yellow" songstress flaunted his husband's massive shoe collection.

The mother-of-one mentioned that Offset owns 32,000 pairs of sneakers, which she called "ridiculous."

While the Migos rapper has an extensive selection of footwear, Cardi B--on the other hand--owns a huge walk-in shoe closet with wooden floors and a high ceiling. Unlike her husband, the female rapper only owns around 500 pairs of shoes.

Multiple reports previously cited that it took the couple two years before they established their dream mansion.

According to TMZ, the "Bartier Cardi" singer and the "Rap Save Me" rapper, whose real name is Kiari Kendrell Cephus, bought the 22,500 square feet house for a whopping $5.795 million almost a year ago. It was also where the pair spent Christmas at the time.

Previously listed by agents Molly Beery and Cia Cummings of Dorsey Alston Realtors, the said property was described as an "entertainers' dream home" which was built in 2006 and was used in various film locations such as the drama series "Ambitions."

Before Cardi B and Offset, the massive Atlanta mansion served as a home to some famous personalities, including the chiropractic doctor Rick A. Kuhlman and wife Amanda D. Kuhlman. They previously bought the property for $1.65 million in 2003.

The update about Cardi B and her husband's huge mansion came months after the couple's marital drama.

In September, the "I Like It" hitmaker filed for a divorce citing irreconcilable differences.

Shortly after, Cardi explained the reason for their split on her Instagram Live and shut down rumors regarding third parties. Instead, she mentioned that she was exhausted from the constant fighting and arguing.

"I just got tired of f-ing arguing," she continued, "I got tired of not seeing things eye to eye. When you feel like it's not the same anymore before you actually get cheated on, I rather just be... you know what I'm saying? Like, I'm tired of people."

Cardi B went on and cleared that she is not ready for another relationship and that she's just channelling her energy in her music.

"My DMs are flooded. I don't actually want to date anybody. I'm so focused on my business that it's crazy."

After weeks of being the talk of the town, fans were surprised after the female rapper gave Offset a steamy kiss during her 28th birthday.

At the time, E! News reported that Offset was attempting to win his wife back.

"They aren't back together but [it's] just a matter of time," the source told the outlet. "She loves the attention from him, and he's trying really hard to win her back."

Shortly after their obvious reconciliation, multiple outlets cited that Cardi B has filed to dismiss her divorce proceedings with Offset.