After her husband was spotted with Kardashian outcast Larsa Pippen, Montana Yao filed for divorce from her 24-year-old husband, Malik Beasley.

This came after they were photographed holding hands two weeks ago while strolling in a Miami mall.

According to reports, the 23-year-old model was shocked seeing pictures of her husband with Scottie Pippen's estranged wife.

In a December 1 Instagram Story, Montana said, "Wow, I don't even know this man. This is wild y'all. I'm seeing it for the first time just like y'all."

On December 8, she filed the divorce paper works in a Minnesota court to finally break free from the NBA player.

It is unclear if she's seeking spousal support or the type of custody arrangement she asks the court.

It is believed that the Minnesota Timberwolves star is back in the state for training camp as the NBA pre-season is about to start.

Though Larsa and Malik haven't publicly commented on the entire ordeal or the pictures of them walking hand-in-hand, Montana claimed in a December 9 Instagram post that she was confused for being kicked out of her home ten days ago.

"We were told to leave our family home ten days ago," Montana wrote, referring to herself and son Makai. "And just like you all, I'm pretty confused." 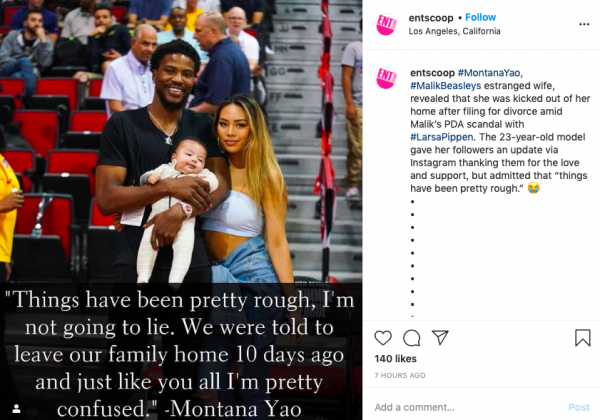 She further revealed that she hear anything from her future ex-husband, nor any type of apology.

An insider told E! News, "Montana filed for a divorce the day she saw the photos. Montana never cheated, and it's not in her character."

"She's not dating anybody. She's a family person."

"She's focusing on taking care of herself with her parents." 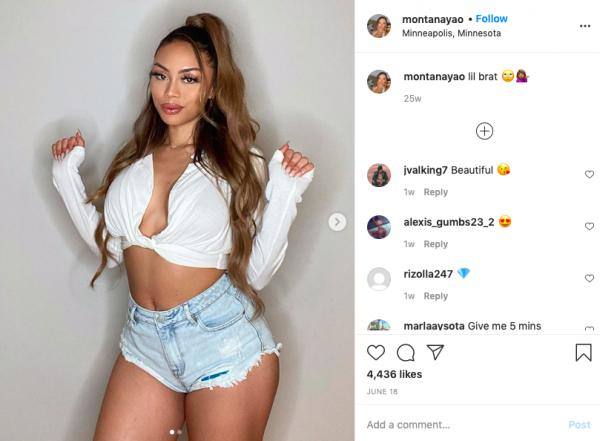 Speaking of the pictures, another source told TMZ that Montana was "blindsided" by the pictures.

According to the outlet, she expected Malik to be home in Minnesota for his 24th birthday - three days after Larsa and Malik's pics were taken.

Montana was reportedly disappointed that he didn't show up.

Montana Yao further admitted that although she isn't the type of person to "disclose too much information," she will do so if she thinks it's "appropriate."

The mom-of-one is grateful for the support for her followers, saying, "I mainly wanted to say, I have never received so many kind words of encouragement and love, and it has really held up to be strong for not only myself but more importantly for my son."

She then claimed that she was "healing" herself from the pain she's experiencing.

As previously reported, Montana Yao and Malik Beasley got hitched in March and even have one son together.

But it all came crashing down when Malik was caught in Miami with Larsa Pippen, having dinner and looking too cozy.

In the pictures, it seemed like the basketball player doesn't appear to care about anything else in the world except Larsa.

But just before they were seen together, Malik was openly flirting with Larsa Pippen in one of her sizzling Instagram selfies.

In the comments, Malik wrote, "I just want to take you on a date and treat you like a queen."

Tags: Malik Beasley larsa pippen Montana Yao
© 2021 EnStars.com All rights reserved. Do not reproduce without permission.
Most Popular
You May Also Like

The drama between Larsa Pippen, her ex-boyfriend Malik Beasley and his on-again, off-again wife Montana Yao is starting to get heated up.

There have been reports that Larsa Pippen could join "The Real Housewives of Miami," and the reality star sets the record straight.

Larsa Pippen Hints Malik Beasley Can be Her Husband and Baby Daddy?

Larsa Pippen and Malik Beasley are continuing to date despite their very controversial relationship.

Larsa Pippen set the record straight and revealed the truth about the cheating allegations between her and Malik Beasley.

No Stopping! Malik Beasley Flirts With Larsa Pippen on IG Amid Drama

Despite the backlash he recently received, NBA player Malik Beasley seems head over heels in love with Larsa Pippen.

Larsa Pippen Claps Back Amid Cheating Issue With Malik Beasley

Larsa Pippen has a message for those judging her amid her cheating issue with married NBA player Malik Beasley.