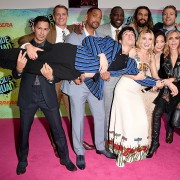 Director James Gunn has unveiled a brand new poster for his first foray into the DC Comics, ahead of the releasing of the first trailer for The Suicide Squad tomorrow.

The poster, designed by Steve Reeves, adopts a grindhouse film aesthetic, suggesting that this will be a unique superhero film when it debuts in cinemas and on HBO Max. It's possibly filled with action, violence and debauchery.

Most of the recent buzz surrounding Suicide Squad has centered on David Ayer's film, owing to hordes of DC fans eager to see his version following the popularity of Zack Snyder's Justice League.

Warner Bros. announced earlier this week that they are dropping Snyder's DC ambitions and will not be designing the Ayer Cut. However, James Gunn's The Suicide Squad is a big part of DC's upcoming plans, and it now appears that the film's publicity push is about to begin.

The poster was shared on Gunn's personal social media page, as you can see below. There is currently no news about when the trailer will be released.

I'll just drop this here. Did I mention that a trailer is coming tomorrow? #TheSuicideSquad pic.twitter.com/VmB9n0rFSZ