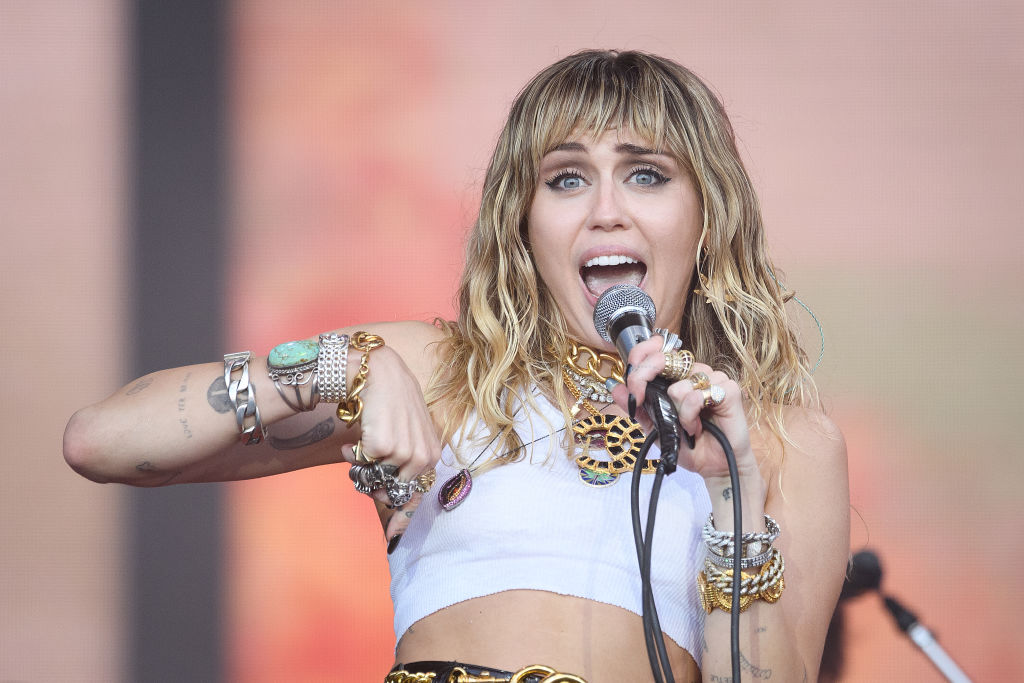 A few days ago, Miley Cyrus broke the internet when she was spotted getting cozy with Yungblud.

The British singer was seen stroking her hair and laid his legs across her lap while the "Midnight Sky" singer was seen playfully biting his finger in photos obtained by The Daily Mail.

The former Disney Channel star has also been spotted taking multiple shots with her friends while nursing on a cold beer.

The pair were at the legendary Rainbow Room in West Hollywood.

At the time, an insider told Page Six that the "Wrecking Ball" hitmaker is "being really thirsty."

"She wants to keep her name out there, and he's this cute rock 'n' roll UK guy and she's latching on. I don't even think they're friends."

However, another report from Page Six revealed that their "cozy night out" doesn't mean they're dating.

So it's safe to say that Miley Cyrus is not dating anyone at the moment.

Perhaps she was just out and about last week to celebrate the 15th anniversary of "Hannah Montana," the show that shot her to stardom.

Last week, the singer-songwriter penned a letter to her former alter-ego, Hannah Montana, as she reflected on its 15th anniversary.

Miley Cyrus has posted a letter on Instagram thanking Hannah Montana and its crew, in honor of the show’s 15th anniversary. 🥺 #HMForever pic.twitter.com/k3Chdd9Jxb

Miley Cyrus' Current Net Worth and Salary in Hannah Montana

Miley Cyrus revealed in an interview that she had one of the lowest salaries in the entire cast of "Hannah Montana."

However, after years of success as an actress and a singer-songwriter, Miley Cyrus has a net worth of $160 million, according to Celebrity Net Worth.

READ ALSO: This Is How Much Celebrity Millionaires Pay For Their 14-Day 'Private Alternative' Quarantine

Miley Cyrus previously dated "Teen Wolf" actor Tyler Posey after meeting on Billy Ray Cyrus's set, "Doc" in 2000. At the time, she was seven, and he was 9. It was even revealed that he was his first kiss.

These two Disney Channel also stars reportedly dating when they were 11 or 12 years old. Dylan told Jimmy Kimmel, "We met at her set, I believe, and we dated. And then Nick Jonas walked by and it was over."

The two singers met in June 2006 when they were just 13 years old. This was before the Jonas Brothers were famous. But the following year, they called it quits. Nick reportedly inspired the song "7 Things."

After they split, Miley Cyrus moved on to Justin Gaston, a former contestant on "Nashville Star." But they broke up when Miley Cyrus had to go film for her movie "The Last Song" after nine months of dating.

Miley Cyrus and Liam Hemsworth dated on and off for years after meeting on the set of their 2010 movie. The Aussie hunk even popped the question in May 2012, but they broke up the following year.

Two years later, they were spotted once more, and Miley Cyrus' engagement ring was back on her finger.

In 2018, they got married, but after a year, they separated. "The Hunger Games" star filed for divorce two weeks later.

Miley Cyrus had a brief fling with Jared Leto because they reportedly have the same interests like art and music. This kicked off in 2014.

The album producer also dated Miley when she and Liam called off their engagement.

Patrick reportedly had eyes set on Miley since 2011, so when she and Liam broke up, they reconnected in 2014 and got together for real. However, they called it quits after five months of being together.

After her breakup with Patrick, Miley Cyrus was spotted kissing Stella Maxwell and later opened up about her sexuality.

She was also seen kissing Kaitlynn Carter in August 2019 in Italy, but a month later, they split.

Cody Simpson is longtime friends with Miley Cyrus. They spent most of the lockdown together after months of PDA and sensual photos on Instagram.

READ MORE: KUWTK News: Kim Kardashian Refuses to Talk About One Important Topic on the Show