Tom Hanks made his fans hold their breaths through the first full trailer of his AppleTV+ movie, "Finch."

The official YouTube channel of Apple TV finally dropped the first look of Hanks' upcoming sci-fi film, hinting about an "epic adventure like no other."

The almost 3-minute trailer began the countdown to the flick's premiere on the streaming service starting November 5. The movie will tell the story of Hanks' character, a robotics engineer, who fortunately survives a rare solar tragedy that wiped almost all living things in the world.

He embarks on a new journey with his newly-created robot, Jeff, whom he assigned to take care of his dog, Goodyear, once he is gone.

"It all happened so fast. There was a solar flare. Goodbye crops and food, goodbye everything. So I hid, frightened and so alone, and I found you," he says, referring to Goodyear.

After creating Jeff, the robot learns its sole purpose is to protect Goodyear. From there, they begin their journey to the west. The robotics engineer alarms his companions of the impending danger if they fail to hit their destination before a storm hits. 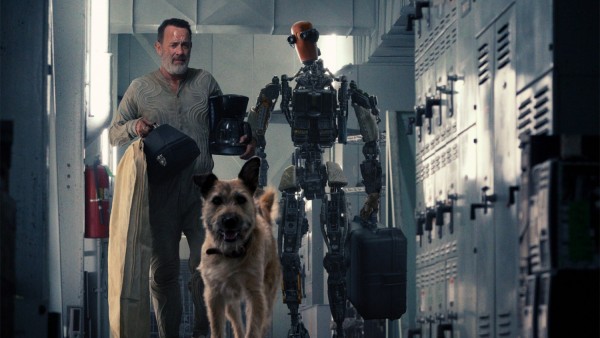 According to Finch, they will experience 150-degree heat and suffer from UV radiation. Before those things occur, the trio needs to reach the mountains as soon as possible.

Despite the dangers, they still share fond memories together, including Finch teaching the robot how to drive and talk to Goodyear.

The end of the clip features a heartwarming conversation between Finch and Jeff, saying they need to do everything together to make it.

"Finch" underwent a lot of changes before finalizing everything.

Initially, it received the title "Bios" before the creators changed it and chose the character's name instead.

The award-winning "Game of Thrones" director, Miguel Sapochnik, helmed the movie with the help of the writers Craig Luck and Ivor Powell.

Hanks reunited with his "Cast Away" director, Robert Zemeckis, who served as one of the producers of the sci-fi film.

Fans could have seen it in May 2020, but the coronavirus pandemic halted its release in June before Universal Pictures postponed it again. Since most theaters remain close, Apple decided to purchase the film and make it available to their subscribers.

Shocking Reason Why Tom Hanks Did Not Accept Jeff Bezos' Invitation To Space Flight Revealed: Is It Health Related?

Tom Hanks had the chance to become one of the first people to be in space through Jeff Bezos, but the actor refused the offer because of one reason.

Tom Hanks Canceled? Fans Alarmed As Internet Launches 'One Has To Go' Trend

Tom Hanks became part of the absurd "One Has To Go" meme online, causing fans to slam others who try to cancel the legendary actor.

Chet Hanks 'About To Make History' Amid Anti-Vaccine Controversy [DETAILS]

Did Chet Hanks score himself a win?

Tom Hanks reportedly sees his wife, Rita Wilson, as a "wife from hell" amid their hellish marriage, their son Chet Hanks allegedly claimed.

She also substantiated her claims with text messages, claiming it took her so long to come forward because Chet said no one would believe Tom Hanks' son would do such a thing.

Tom Hanks and his wife, Rita Wilson, are so tired of their son Chet Hanks, embroiled in many legal things in the last couple of months.

Tom Hanks' latest Netflix movie, "News of the World, piqued the interests of critics and even garnered positive responses.

The world lost a number of its most important gems, and here are the top 10 heartbreaking news stories this year.