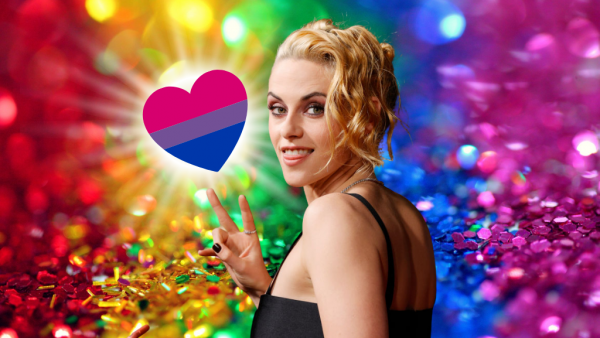 It was only four years ago, in 2017, that actress Kristen Stewart came out as bisexual, but she, and the movie industry, have come a long way since then.

For one thing, the Spencer actress just announced her engagement to her girlfriend of two years, screenwriter and actress Dylan Meyer. She started dating women as early as 2014, and many assumed she was a lesbian until she came out publicly.

Meanwhile, the movie industry has been making steps in the right direction when it comes to LGBTQ+ representation as well - albeit much, much smaller ones. The Walt Disney Company, for example, has been criticized in recent years due to their constant claims of featuring gay characters in films, only to have them either barely mention their sexuality, or barely appear at all. They said that LeFou was gay in the live action Beauty and the Beast, but left all the characterization in subtext; they said they'd included the first openly gay characters in the movies Onward and Avengers: Endgame, but in each film the characters had only one line mentioning their sexuality, and so little screen time that their role could just have easily been cut. Other studios may venture into the areas of gay romance and representation, but gay characters in otherwise "regular" films are often played for camp (or they die), and gay romance movies often end in tragedy.

For Kristen Stewart, this isn't nearly enough. When The Daily Beast asked her about this very issue, she first joked about the studios begging for "brownie points" with these attempts. She then continued, more seriously:

"I was thinking about the barely better gay stuff we have to consume in movies lately. The tiny bits, or the overwrought lesbian period drama-that I've done. But I was in my bathroom brushing my teeth this morning and thinking, 'There should be more! How many shitty f***in' love stories between a man and a woman have we seen? So many attempts! And we should be able to messily attempt to tell our stories.' We're just a little late to the game."

She also hopes to begin to correct that, however, with her upcoming directorial debut The Chronology of Water, an adaptation of a book about an Olympic hopeful named Lidia Yuknavitch. According to the Barnes and Noble summary of the book:

"Lidia Yuknavitch, a lifelong swimmer and Olympic hopeful escapes her raging father and alcoholic, suicidal mother when she accepts a swimming scholarship, which drug and alcohol addiction eventually cause her to lose."

Yuknavitch was also bisexual, a detail that likely factors more into her life story than one would expect - and also makes her an easy character for Stewart to empathize with.

"Her relationship to orientation and gender is as amorphous as I find to be honest.... She runs the gamut, though. In a quick sum-up, her life is the most interesting because of the way she finds words. She excavates her voice on paper before she's ever able to find it physically. Her memoir unlocked me and encouraged me to find my own voice, to put it down on paper, to make it physical and use it out loud. The things that [you] love the most introduce you to yourself."

The Chronology of Water is currently in pre-production, working on finding a cast and on financing. The production team is yet unsure as to when they will begin shooting, but Stewart is tentatively aiming for February.

In the meantime, you can keep ahead of the Oscar buzz and see Kristen Stewart in Spencer, in theaters now.

Tags: Kristen Stewart Spencer Princess Diana Movies actress LGBTQ
© 2022 EnStars.com All rights reserved. Do not reproduce without permission.
Most Popular
You May Also Like

Kristen Stewart has recently confirmed that she is engaged to her girlfriend of two years, Dylan Meyer.