22 Men Who Are Better Singers Than Jesse McCartney - Yes, Barstool Baited Us Again, But That List Was Just Stupid 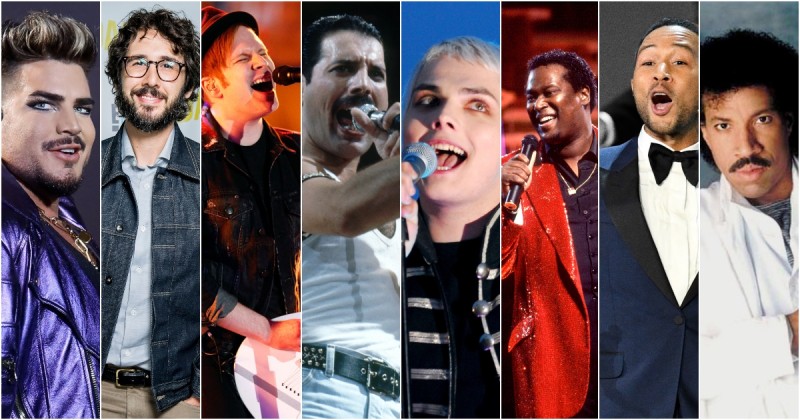 We all know what they're doing at this point, but Barstool must really enjoy being told how wrong they are, because they have posted yet another "Top 10 Of All Time" list with several obvious omissions and confusing additions on Twitter. They did this already with female singers and Christmas movies, and now they've moved on to male singers.

Predictably, their list for this one was just as bonkers as the last two.

Power Ranking the Top 10 Male Singers of All Time pic.twitter.com/Y4iOASX97B

It's not that we think Jesse McCartney is a BAD singer - he's very good - but we think that even he would acknowledge that he has not earned a spot above Freddie God Damn Mercury.

Here is OUR list - not of Power Rankings for the Top 10 Male Singers of All Time - of 22 guys They Should Have Put Before Jesse McCartney (in no particular order.)

Let's get these guys out of the way first:

They were all on the list, it's true, but they all should have been ranked WAY above McCartney. Adam Lambert sings in Freddie Mercury's place with the band Queen now, and he works with Lady Gaga, and Stevie Wonder is Stevie Wonder.

(Also, look at those photos in the original tweet again: Why is Frank Sinatra GREEN? What is this? Is he like, a reverse oompa loompa?)

Since we just mentioned him. Also, THIS ONE SHOULD BE OBVIOUS. THERE WAS A MOVIE ABOUT IT, FOR GOD'S SAKE. HE IS FREDDIE. MERCURY. HE WAS A GOD.

Literally how dare they.

If they were gonna do former boy band members, they could have at least gone with the clearly superior one. One of these men has performed at the Superbowl. It was NOT Jesse McCartney. (Also, one of them was in NSYNC, the other was in Dream Street. They are not the same.)

Ok we know counting two people as one entry is technically cheating, but it would literally be criminal to put one of them down and not the other. That's not how they work. That's simply too much raw vocal power to be held by one person.

You know we had to put our boy in. Also, though, nobody could argue that Josh Groban has THE pipes. It's literally all he's famous for. (That and possibly being fake.)

Also, speaking of guys who are famous for their golden voices before literally anything else, we must offer you two more:

A smoother voice does not exist in our modern day. He's the 21st Century Frank Sinatra and everyone knows it.

Also, he can do this:

This guy is so legendary they parodied him on Spongebob back when we were kids.

It's actually a crime that he was omitted from this list at all. How could you talk about powerful male singers and not talk about the guy who did "Hello?" (Even if that "Hello" music video IS creepy as all hell.)

Hozier is so good he may as well be magic. He hides out in some Irish bog for years and then comes back with some of the most powerful songs you've ever heard in your life - but sure, he's not as good as Jesse McCartney.

Also, if I ever saw this on the subway I'm pretty sure I would die on the spot.

Yes, he may be punk/alternative rather than mainstream pop or R&B, but Gerard Way deserves a spot. My Chemical Romance literally defined a generation. The Black Parade is an institution and his vocal chops are directly responsible.

First of all, Sam Cooke deserves extra distinction for being one of the OGs - ESPECIALLY since he was a Black superstar in the 50s and 60s, which was, needless to say, not easy. He laid the ground work for like half the guys on this list - and you can hear in his singing where his influence impacted music today.

Speaking of Sam Cooke: Here's the guy who had the vocal chops to play him believably in the recent Regina King film One Night In Miami. He is an Oscar away from an EGOT and it shows. The Tony he won for Hamilton over Lin-Manuel Miranda (which was, by the way, exactly what Lin wanted) was well-deserved.

This man can sing literally anything and make it sound good. He also might be able to hit any note in the entire world, to be quite honest. The fact that he can do what Idina Menzel does alone is.........so insane I can't even think about it.

(Also, on a more personal note, I Am In Love With Him.)

Forget the "Thong Song" for a minute. We know it's hard. But just listen to his voice. Sisqo has other songs. It's not his fault people are obsessed with novelty music. Being funny does not preclude you from being considered a powerful singer. (Honestly, doing both just makes whatever you're doing 100000x funnier.)

Even if you're not into rock, everybody has at least heard of Fall Out Boy. And Patrick Stump? He's got that soul voice.

He's a member of Boyz II Men, in case the video didn't make that clear. Listen to those vocal runs. The amount of control that takes? Insane. This guy was basically handed a golden instrument at birth (and then still worked really hard on it.)

Teddy Pendergrass has such an amazing voice that if you mute this you can't even tell he's singing. He looks like he's doing standup or giving a motivational speech or something. That requires an insane amount of power - literally, ab-muscle power - to be able to do.

Last but not least (no way in hell are we trying to definitively RANK these guys, we're not insane), yet another guy whose voice is so good you almost don't have to say anything else.

Just listen to the ease he hits those notes with. He makes it all sound effortless. You might even call him a...legend.

Okay, okay, we'll see ourselves out.

When The Red Carpet Is Your Favorite Part Of Fame: These 8 Celebrities Went From Regular Star To Fashion Icon

They may have begun as an actor, singer, athelete, you name it - but once they found a love for style, all bets were off.

Broadway is coming to TikTok through "Ratatouille: The TikTok Musical."

Adam Lambert admits to being friends with Sam Smith but denied there is anything romantic in their relationship.

Adam Lambert Is About To 'Surprise' His Fans On 'American Idol'

Fans are about to see something pretty outstanding when Adam Lambert returns to 'American Idol.'

Is Adam Lambert Too Racy For Singapore?

The 'American Idol' star is causing quite the stir in Singapore, after petitions urge the cancelation of his show ahead of New Year’s Eve.

New 'Glee' spoilers have been released regarding the songs being sung in episode 9, titled Frenemies.