Just days after reports indicated that Jennifer Aniston has finally patched things up with her estranged mother, Nancy Dow has died.

According to People Magazine, Dow, who starred in classic television shows such as The Beverly Hillbillies and The Wild West in the sixties, suffered a stroke back in 2011 followed by another one later that year.

The actress released a statement that said, "It is with great sadness that my brother John and I announce the passing of our Mother Nancy Dow. She was 79 years old and passed peacefully surrounded by family and friends after enduring a long illness."

According to In Touch Weekly on Wednesday, Aniston visited her mother for the first time in nearly five years on May 12th. Dow was not invited to Aniston's first wedding to Brad Pitt back in 2000 and she also didn't attend the actress' second wedding to her husband Justin Theroux in August of last year.

For the most part, fans have been supportive of the Mother's Day actress, sending out their condolences via twitter:

jennifer aniston's mom died oh my god my heart is broken for her :(

#JenniferAniston the toughest thing in the world is the lost of your mother. only time can heal but you never forget the hurt — C THOMAS (@FAITHSERVEUSA1) May 26, 2016

My deepest sympathy Jennifer on the passing of ur mother. May she rest in peace. U, ur family and friends are in my prayers.#JenniferAniston

@jenifferaniston I am so sorry 4 your loss/mom. No words will help yet just luv & support as you grieve & know it has NO time limit. I KNOW — Leigh Duncan (@LDuncanWriter) May 26, 2016 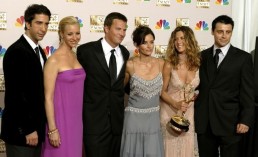 Jennifer Aniston Style News: Actress Not As Glamorous As You Think [VIDEO]