Tom Brady is currently serving a four-day suspension from the NFL, but luckily, he's far from bored.

In addition to tending to his relationship with his wife, model Gisele Bundchen, the New England Patriots quarterback has a responsibility to his three kids, 9-year-old John, whose mother is Brady's ex-girlfriend, actress, Bridget Moynahan, 6-year-old Benjamin and 3-year-old Vivian, whose mother is Bundchen.

“Well, [off time] is usually focused around the kids, you know, you spend so much time with them and trying to be a parent — which is such an important part of our lives — so, whatever they’re into, that’s kind of what you do. You try to support them and the things that they’re doing, and encourage them in different ways,” he explained to Entertainment Tonight.

Brady and Bundchen celebrated their 7th wedding anniversary in February.

“She’s my best friend. We spend as much time as we can together, and you know, it’s a busy life we have and we have three kids,” Brady gushed of Bundchen.

However, it is Vivian who has him wrapped around her finger.

“It’s the worst, well, it’s not the worst for me, I think it’s the worst for my wife who’s trying to instill some discipline in her and I just give her whatever she wants," he admitted. "But isn’t that what men are supposed to do for daughters?” 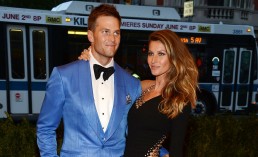