They've been combatting rumors their marriage was on the rocks for a little while now, but Nicole Kidman and Keith Urban seemed to take a much-needed night off from trying to prove the rumors wrong to have a hilariously awkward visit on The Tonight Show Starring Jimmy Fallon.

Kidman was a guest on Fallon's show as she promoted her new movie Lion, and she wasted no time during her appearance bringing up a time that she and Fallon almost had a chance to be a couple several years back, something Fallon screwed up on because he didn't ask her for her number-twice.

The pair revisited Kidman's last appearance on the show, where she had reminded him that they had been on a date before, but then she brought up the time he screwed it up (after an amazing sequence where Fallon seemed to zone out on her as she talked), reminding him she had tried to get his attention, but he never picked up on the clues.

"There's more to the story," Kidman said. "The buffet. We were at David Finch's house, I think it was David Finch's house, and it was when Brad and Jen were still together, so it was a long time ago. And you could have asked for my number then, because it was round two, well, second chance, and you still did not ask for it."

"And you know that's true!" She continued. "So do not pretend. [It] was in the kitchen, and that's even more offensive that you don't remember. Do you remember the kitchen and the buffet?...My agent said 'Jimmy's gonna be there and he can ask for your number...' And we were lurking in the kitchen, everyone went out, and I'm like, waiting and waiting and waiting, and you're at the buffet, and this is so true and you know it, and you still didn't ask for my number!"

However, things only got to be more hilariously awkward when Urban then appeared on stage as well, as Kidman said he wanted to "take care of her" while she was on the show, and the two men also engaged in a hilarious exchange after Urban walked onstage to serenade Fallon, then sweep his wife into his lap.

"Tell me about the buffet!" He told Fallon.

When Fallon then asked is he could come see the couple in Nashville, Urban enthusiastically invited him because he felt Fallon couldn't pose any threat to this marriage.

"I'd feel quite safe actually, since you have no problem ignoring my wife in the kitchen," he joked. 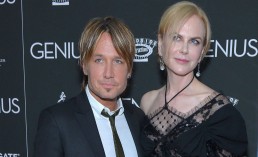 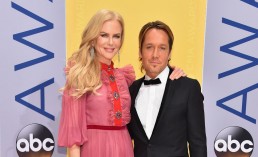