Rumors had circulated that the Fifty Shades Darker stars, Jamie Dornan and Dakota Johnson had their relationship blossom from a common co-actors into secret love affair. This had happened right after a gossip had spread about Dornan setting up a divorce with his wife Amelia Warner.

Before the stars had filmed the first series of Fifty Shades, it was seen that these two had their own significant other. Dakota was in a relationship with Matthew Hitt while Dornan was happily married to Warner. However, the female lead star of Fifty Shades had ended her two year relationship with her boyfriend earlier this year due to an on and off relationship as mention by Mail Online. Later on, speculations had grown after Johnson threw a surprise for Dornan.

Recently, news had spread that Dakota and James are putting their secret love affair to an end. Despite of these rumors, the actor was seen to walk in the red carpet together with his wife for the premier of Mum's List. He was seen to support his beloved wife who took part for the music in the film. At the same manner, the look of love was noticeable on how Dornan stares at his wife during the event as mentioned by Inquisitr.

On the other hand, Dakota has remained her silence regarding this issue. It was reported that she had deleted her Instagram posts that seems to protect her privacy. Moreover, it was noticeable that she had only retained a single photo which was from AnOther Magazine.

The trailer of the sequel, Fifty Shades Darker was released in the past week with sexier and steamier scenes to spot which will be out on cinemas on February 10, 2017. The trailer had gained millions of views on the day of its released. 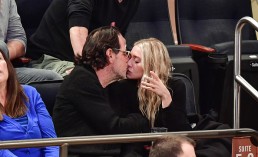