Why is the royal couple, Duke and Duchess of Cambridge, spending Christmas with the Middletons, rather than with the British royal family at Sandringham?

It's a clear break from tradition, and that's what is beginning to set a new tradition, according to independent. After George was born in 2013, the royal couple has been walking its own path.

That is because it has "always" been the children first. The royal couple is hands on with its own parenting technique.

"The royals have traditionally made very standoffish parents," a source told Woman's Day. "In the case of George and Charlotte, however, they always come first. As far as Wills and Kate are concerned, there are no exceptions to the rule."

The parents are said to be so happy with their beautiful children that they want to go in for a third child quickly, according to Vanity Fair. "They want at least three kids and for them to be close in age."

Living in their country estate Amner Hall and travelling constantly to Kensington Palace for one-night stays as well as royal London business, the royal couple is keen to continue to live in London till they get a call for duty.

"It's no secret that William doesn't like the media intrusion into his life, and in the country he can escape," said a family friend. "The Queen and the Prince of Wales have given their blessing for William to live this life, and William is very grateful. It's enabling him and Kate to raise their family in a way that's as close to ordinary as they can get."

"William doesn't want George and Charlotte going through some of the experiences he went through growing up. Everything he does regarding his family is very deliberate." 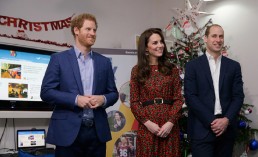