Carmelo Anthony is leaving his hometown New York City to play for the Oklahoma City Thunder. Word is that could be the last piece of the puzzle to save his marriage with fashionista Lala Anthony.

A “super psyched” Carmelo is “hoping that he and LaLa cause it as a fresh start,” an insider told Hollywood Life Thursday morning.

Carmelo and LaLa reportedly took some time apart after rumors swirled that he impregnated another woman.

“The past year has just been full of stress and heartbreak,” the source continued, “and Carmelo wants to get his marriage back on track more than anything. He believes that a change of scenery, a new home, a different team and a fresh set of friends could be the perfect remedy, and a way to draw a line under their issues once and for all.”

Still, it might not be that simple as LaLa reportedly isn’t ready to make the big move yet – considering New York City is her home too.

“LaLa isn’t committing to moving with Carmelo right now. Her friends and work life are New York based, and her career is really flourishing. Plus, she still hasn’t fully forgive him – Carmelo is going to have to jump through some more hoops before LaLa agrees to pick up sticks and relocate to Oklahoma.”

Carmelo’s latest move is shouting out LaLa and their son, Kiyan, 10, on Instagram this week.

“You can’t really share who you are with the world ignoring the pieces that make up who you are as an individual,” The wind cannot destroy a tree with strong roots!!! My True Victory in Life @lala And My Young God THANK YOU for holding me down and being the true definition of what STRENGTH is. #STAYME7O

LaLa broke her silence on her love life and told Wendy Williams she’s not planning on divorcing him, at least not yet, pointing out that “marriage is hard.” 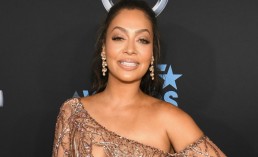 LaLa Anthony IG: Star's New Attitude Amid Carmelo Drama 'Never Going Back To The Way It Was' [VIDEO]