On Thursday night, Missy Elliott received the greatest surprise at the 2018 Essence Black Women in Music event. The rapper knew she would be presented with the award but had no idea that her longtime friend, Janet Jackson, would hand her the trophy.

Jackson was one of the many stars in attendance to pay tribute to the legend. The singer presented Elliot with Essence's Visionary Award at the Highland Ballroom in New York City.

The "Work It" rapper began to cry after Jackson wrapped up her introduction and then shared a long embrace with her on stage.

Elliot also expressed her love for Jackson and took some time to reflect on their friendship.

"I've known Janet over a decade and this is not just someone I do music with. I can call Janet any time of night and she will listen. The times that I may have felt like giving up, she's always gave me an encouraging word," Elliot said.

On Friday, Jackson took to Instagram to celebrate the moment.

"Congratulations to my sister @missymidemeanorelliott for receiving her @essence "Visionary" award! I am so happy that I could be there with you for your special moment. Love U sis #BlackWomenInMusic #Essence," Jackson wrote.

Orange is the New Black star Danielle Brooks, comedian Phoebe Robinson, Janelle Monae, and T.I. were among the several stars who attended the pre-Grammy event to celebrate the rap icon.

Brooks sported a blue Adidas track suit in honor of Elliott's many fashion looks over the years.

Brooks explained that she has been a fan of Elliott's since she was young. Her mother was very strict about the music she listened to, but she always found a way to listen to Elliott.

As for the performances, Leikeli47 and two-time Grammy nominee Rapsody paid tribute to the rapper.

The 46-year-old used her own success story as a way of encouraging everyone to never give up.

She stated that many in the industry thought that she wouldn't be a successful female producer and that she didn't look like what society considered "beautiful."

Elliott also thanked Essence for showing her what strong black women look like.

As for Jackson, she's confirmed to headline the 2018 Essence Music Festival in New Orleans on July 5-8 along with Mary J. Blige, Jill Scott, Snoop Dogg, H.E.R., and Marsha Ambrosius. 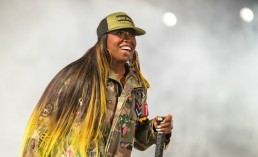 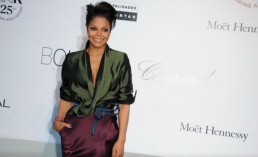