Ellen DeGeneres tests Mandy Moore with a game dubbed "Why Is Mandy Crying?" For once, the actress left the audience in stitches instead of tears.

Moore showed up in The Ellen DeGeneres Show to chat to the host about her hit NBC drama, her new home with fiancé, Taylor Goldsmith, and crying.

DeGeneres Guesses Why Moore Is Crying

From A Walk to Remember to This Is Us, the Golden Globe-nominated actress is famous for playing tearful characters and leaving audiences sobbing along with her. In fact, she has had to cry so much on her projects that she has a trick to get the tears to come: music.

"I have to mentally wake up that morning and mentally prepare myself that I'm going to have to cry," she says during the show. "My trick is I will pick a song at random that's sort of sad and evokes some sort of emotion in me, and I will listen to it incessantly."

It's a good and obviously effective way for Moore, but her secret to crying did little to help the champion crier with DeGeneres' game titled "Why Is Mandy Crying?" The game requires Moore to tell the host exactly why she is crying, while wearing a mouthpiece that hampers her ability to speak coherently.

It turns out that the challenge is a tough call even for the veteran actress. Fighting back laughter as she tried to speak, Moore did her best to make DeGeneres understand her as she tells the host that he "bumped" her with his burrito.

"He humped you... in his hernia?" DeGeneres guesses.

The next round was close, but in the hilarious last phrase, Moore tries to say that the donkey "bucked" her mom.

"What?" the host exclaims, scandalized, leaving the This Is Us star practically in tears of laughter. "The donkey did not do that. That's terrible."

In the same episode of the show, DeGeneres presented her guest with a cheeky gift that any This Is Us fan will recognize as a reference: a slow cooker. The kitchen appliance was the cause of Milo Ventimiglia's character's death.

"I will remember to unplug this after I'm done using it," Moore promises, laughing.

The present is for Moore's newly renovated home that she shares with her fiancé. The actress gave a tour of the California retro ranch residence on social media, showing off the intricate details and airy design of her new abode.

© 2020 ENSTARS, All rights reserved. Do not reproduce without permission.
TAGSMandy Moore Ellen Degeneres the ellen degeneres show this is us
SEE COMMENT
CLOSE COMMENT 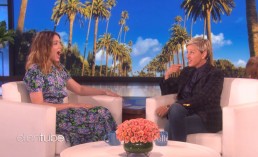 Ellen DeGeneres Gives Mandy Moore The Ultimate 'This Is Us' Present 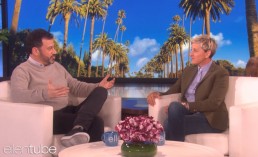