Before she was a mom, a wife, or even an actress, Jennifer Garner was a middle sister to Melissa and Susannah.

The Love, Simon actress marks National Siblings Day on Instagram by posting a sweet tribute dedicated to her two siblings.

The film and television actress is her family's middle child and shared a collage of her and her two sisters, including photos from their childhood.

"First and foremost, always and forever, I am the middle Garner Girl," she wrote on the caption of the photo. "How lucky am I to have such sisters."

The actress included a few hashtags in the post that placed her sisters, Melissa 49, and Susannah, 43, in the spotlight.

It's not the first time Garner has gushed about her sisters to the public. In 2009, the mother of three talked about how a healthy dose of sibling rivalry inspired her to get to the top of the Hollywood game.

"If I'm totally honest, I wouldn't be where I am today if it wasn't for the fact that I have this bigger-than-life, incredible older sister," Garner tells The Independent. "She's beautiful, and she was valedictorian, got a 1600 on her SATs [the top score on the US high school exams] and was the head majorette. I was just the middle kid, kind of looking for attention. So that's what drove me, I think, to do things she wasn't doing."

Despite the rivalry, Garner explains how much she values being part of a strong sisterhood with Melissa and Susannah.

"Being the middle sister of these three girls is the relationship that defines me more than anything else," the actress says resolutely.

Despite leading very different lives — "I have one daughter who has an MBA, one who is a CPA, and one who is an actress," their mother Patricia quips — the trio always keep in touch through the phone.

Alcohol and social media don't usually mix well, but Garner was delightful when tipsy as she happily shares the contents of her bag to her followers after having a little wine.

Just like anyone else, Garner has some clutter in her purse including a stray dollar bill, a datebook, and some stickers for her children.

However, other items she pulled out were quite perplexing, such as a honey dipper, a geode, and a faux light switch. There are few instances one would need these on a movie or television set, but Garner didn't explain why she carries them around.

Garner is set to be part of upcoming HBO series Camping. 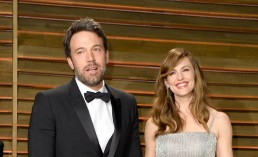