Dwayne "The Rock" Johnson got invited by his self-proclaimed biggest fan to the prom, and of course, he surprised the teen with an awesome response.

Johnson is arguably one of the most in-demand wrestler-turned-actors nowadays, but it's surprising that fame doesn't get to his head, still appreciates his fans, and knows how to treat them nicely. Apart from sheer talent, these might be the reasons he was remained loved by Katie Kelzenberg, a senior student at Stillwater Area High School.

Kelzenberg, a hardcore fan of the actor, has a lot of The Rock merchandise and even dressed up as his idol in Halloween. It's a known fact among her friends as well, as she was given a life-size standee of Johnson for her birthday. That's why, for her prom, she invited the Rampage star to her prom on May 5th.

Wearing a black top and a fanny pack, Kelzenberg tried to convince Johnson to go with her to the prom via Twitter, even presenting it through a "punny" question: "Will you 'ROCK' it at prom with me?"

However, Johnson couldn't make it but made sure his fan will still get to see him, at least on the big screen. Kelzenberg, and probably her schoolmates, got quite a surprise when during her AP statistics class, as the announcement via the Intercom came. But wait, it isn't just any ordinary broadcast.

"You're probably thinking 'What?!! What is The Rock doing on our intercom system?' Well, I'm sending a message to a very special young lady, and her name is Miss Katie Kelzenberg," Johnson said.

The San Andreas actor then went on to express his gratitude for Kelzenberg, whom Johnson referred to as "cool" and "awesome," for her unique way of inviting him to the prom. However, he explained he couldn't come because of a conflict in schedule, as he is going to be shooting for the film Jungle Cruise in Hawaii.

The video of Johnson making the announcement was uploaded by the wrestler-comedian himself on his Instagram, which was simultaneously posted as the broadcast was aired, and he expressed his admiration for the young lady for her confidence. He pointed out the most girls shy away when they meet him.

To further prove his love for his fan, he instead gave Kelzenberg an extraordinary chance: to watch Rampage at a nearby theater with the cinema all to herself. Johnson then said she can invite 232 people, her friends and whomever she wants to, and even their unlimited snack will be provided, thanks to her idol.

"Thanks for being an AWESOME FAN and I'm a lucky dude to have fans like you.
Uncle DJ," Johnson wrote with his clip.

SURPRISE KATIE KELZENBERG! About a week ago, I come across a video on my Twitter feed, from a student at Stillwater Area High School (oldest high school in Minnesota) asking me if I would be her date to her prom. Unfortunately, I’ll be shooting during that time in Hawaii, BUT I was so impressed by this young lady’s charm and confidence to even ask me (ladies always get shy in front of me) that I had to do something special. I decided to rent out an entire theater (capacity 232 seats) in her town so Katie and her closest 232 friends and family can enjoy a special screening of RAMPAGE. And all the free popcorn, candy and soda high school kids can consume! You’re money’s no good Katie... everything is on Uncle DJ. !! And I also taped a special morning message surprising Katie and her high school that will play across the school’s intercom system... literally...RIGHT NOW, Katie should be turning red hearing me surprise her in front of her entire school. I wish I was there in person Katie, to see your reaction to all this, but I’ll hear about for sure and most importantly - you and all your friends have fun at the theater and ENJOY RAMPAGE! Thanks for being an AWESOME FAN and I’m a lucky dude to have fans like you. Uncle DJ ️ Ps - the gorilla in Rampage is way smarter (and better looking) than I am, but don’t tell him that because he has a HUGE ego A post shared by  therock (@therock) on Apr 20, 2018 at 6:39am PDT 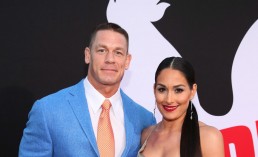 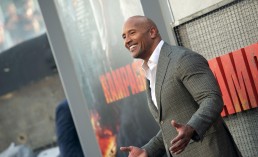 ‘It’s Gotta Be You’: Dwayne Johnson Wants Jimmy Kimmel To Be A Doula For Girlfriend Lauren Hashian 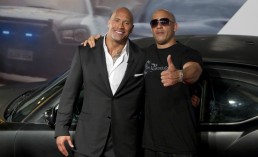