There's nothing like a mother's love! During a sit-down interview with Ellen DeGeneres, Kris Jenner addressed how Khloe Kardashian is doing in the wake of Tristan Thompson's cheating scandal.

Kris Gets Extremely Emotional About Khloe

The matriarch of the Kardashian-Jenner clan immediately got choked up and tried her best to hold back the tears while appearing on The Ellen DeGeneres Show, which airs on Friday, May 4. Jenner stated that she recently visited the new mom in Cleveland and that despite all the drama, she's doing really well.

"She's figuring it out one day at a time, she's just the best mom already. That baby is so cute, little True," the momager remarked.

While the world may have been shocked to know that Thompson had been disloyal to Kardashian just days before she gave birth to their daughter, Jenner said that the family handled it all pretty well and just supported each other.

The 62-year-old mother of six told DeGeneres that she's always going to support her kids no matter what and that they are there for one another when they need to be.

"Poor Khloe. Like, I don't even know how to describe it besides it's just so f-ed up," the KKW Beauty founder said.

Fans of the Good American designer know that Khloe had refrained from posting anything on social media since confirming her daughter's name via Instagram.

Well, the first-time mom has slowly but surely returned to social media by making subtle comments.

First, she commented on her little sister Kylie Jenner's new Instagram photo of herself and her daughter, Stormi, while on vacation in Turks and Caicos for Travis Scott's 26th birthday.

Then, the 33-year-old Revenge Body host clapped back at E! News after they posted a photo of her and Kourtney Kardashian claiming that they both could relate to one another as Kourtney continuously made headlines due to her tumultuous relationship with her ex-boyfriend, Scott Disick.

"Khloe feels like she is living in her own personal hell." If there's any sister that understands a bit of what Khloe is going through it's Kourtney Kardashian. Link in bio for the exclusive story on how Khloe is learning to cope by leaning on her sister. ( WireImage) A post shared by  E! News (@enews) on May 2, 2018 at 7:04pm PDT

"Oh damn.... I hope I don't crush her by leaning on her. I love my little @kourtneykardash," Khloe commented. 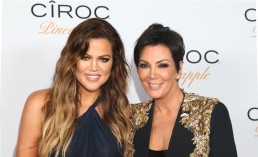