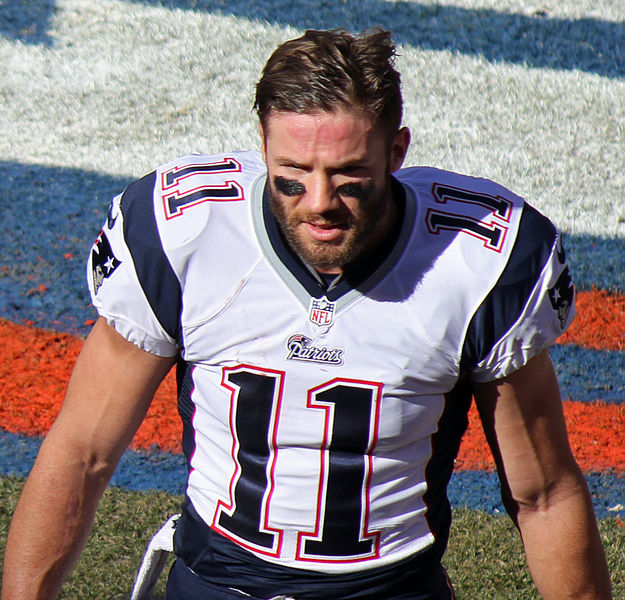 The star wide receiver for the New England Patriots Julian Edelman was released by the police after being arrested on Saturday. The Super Bowl MVP was arrested for a minor case of misdemeanor vandalism, according to multiple news outlets.

Edelman, 33, was arrested by the police in Beverly Hills for jumping on the hood of a Mercedes Benz at 9:00 p.m. local time causing serious damage to the vehicle. This information is according to the reports released by ESPN, TMZ and NBC Boston.

After the arrest, the NFL star was released by the police. However, he is scheduled to appear at the Airport Courthouse on April 13 for the hearing of his case. The Beverly Hills Police Department did not immediately respond to the request for comment by PEOPLE.

On the other hand, a representative of Edelman said that they will not be giving any further comments on the reports that came out.

On the night of his arrest, Edelman was seen with Paul Pierce, the retired Boston Celtics star. In an Instagram photo posted by Paul, he was also with former Patriots receiver Danny Amendola at Cantina Frida, a popular Mexican restaurant in Beverly Hills.

In the caption, Pierce  tagged the two professional athletes, referring to themselves as Boston Champs.

Over the years, Edelman has been seen in several Boston sporting events, including the games of the Celtics and the Red Sox. In April, he was seen at the TD Garden for the matchup between the Boston Bruins and the Toronto Maple Leafs. The crowd lost it when the Jumbotron showed him with a beer on his hand.

Edelman was seen joining Bruins fans at the beginning of the match while waving the fan banner. By the end of the first half, the athlete was seen chugging a beer that got the entire stadium cheering, including the Bruins players themselves.

Did Edelman have a few good drinks the night he was arrested that got him to do what he did? Was the star player a bit too drunk that he wasn't aware of his actions that night? Although he was released by the police, the public is still waiting for an official statement from his camp to explain what truly happened that night.

Athletes, especially professional ones, have a wide reach of audience, including the young ones. They serve as an inspiration to many, so their actions are always highlighted by the media -- and this one is no exception.

Edelman received a lot of negative publicity for his actions and it is all over the news.

Did he really do it? Did he have too many drinks to tell what is good action from what it is not? Perhaps more than admitting to what happened, people just want to hear a statement from him to reiterate his accountability. Opting not to clarify allegations of vandalism may be sending the wrong signal, especially to the young kids who admire him.

After all, Julian Edelman is not only responsible for himself. When he decided to become a professional athlete, he knew he was also responsible for what the future holds for those who aspire to be just like him.