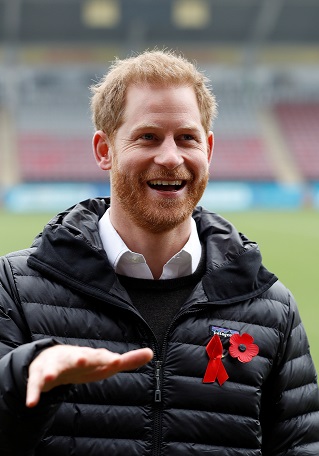 After a whirlwind of emotions, speculations and rumors, Prince Harry finally breaks his silence on their decision to step back as senior members of the royal family.

During his speech at the dinner party for the supporters of Sentebale, a charity he co-founded, the 35-year-old Prince delivered a heartfelt message addressing his infamous exit to the royal family with his wife, Meghan Markle.

"I want you to hear the truth from me -- as much as I can share, not as a prince or a duke, but as Harry, the same person that many of you have watched grow up over the past 35 years," Harry began.

The Prince said that the United Kingdom will always be his home, especially that he grew up getting the support of the people until he has found his wife and finally settled down.

"Finally, the second son of Diana got hitched, hooray!" he jokingly said, which drew laughter from the crowd.

The Duke of Sussex also acknowledged how the royal family supporters trusted him to marry a woman who upholds the same values as he does.

Harry said that their controversial decision did not come easy, and they were left with "no other option" but to push through it.

"The decision that I have made for my wife and I to step back is not one I made lightly. It was so many months of talks after so many years of challenges," Harry said.

"What I want to make clear is, we're not walking away, and we certainly aren't walking away from you," he added, referring to the people of the U.K. and their supporters.

The Prince reiterated that his new family would continue to serve the Queen, the Commonwealth, and his military associations even without public funding. He said that despite the lack of money, it would not change who he is and how committed he is in supporting the causes close to his heart.

Prince Harry also appeals to the people to understand his decision to step back from the royal family so that he could step forward towards a more peaceful life with Meghan and their eight-month-old baby Archie.

The Prince, who has been under heavy public scrutiny since he got married in May of 2018, also took a lowkey swipe on the media whom he referred to as a "powerful force." He added that in the future, he hopes that their mutual support will be more powerful than that of the media.

The Duke of Sussex's speech came a few hours after his grandmother Queen Elizabeth II released an official statement expressing support to their decision to lead a private and independent life.

The same statement from the Buckingham Palace also confirms that Meghan and Harry will be stripped down of their His/Her Roya Highness titles, but they could still use the Duke and Duchess of Sussex titles. Moreover, Harry would be able to keep his title as a Prince.

The Palace also confirmed that the couple will payback the Sovereign Grant the used to repaid their Frogmore Cottage and said they will now rent it privately. However, the Palace refused to comment on Meghan and Harry's security arrangements.