In one of the weirdest feuds this 2020, YouTube star Jake Paul dissed former One Direction band member Zayn Malik on Twitter.

On Sunday morning, Jake Paul tweeted, "Almost had to clap up Zane from 1 Direction. He is a little guy and has an attitude and basically told me to f*ck off for no reason when I was being nice to him."

Paul expressed his anger over the Bradford-born singer for allegedly snubbing him in Las Vegas on Sunday night. He continued, "Zane ik you're reading this... stop being angry cause u came home alone to ur big ass hotel room hahaha."

In another tweet, the YouTuber elaborated that the British singer "literally started yelling and freaking out" and was reportedly yelling, "You wanna test me mate?"

But it looks like Zayn's on-again, off-again girlfriend Gigi Hadid is not going to let this fly. 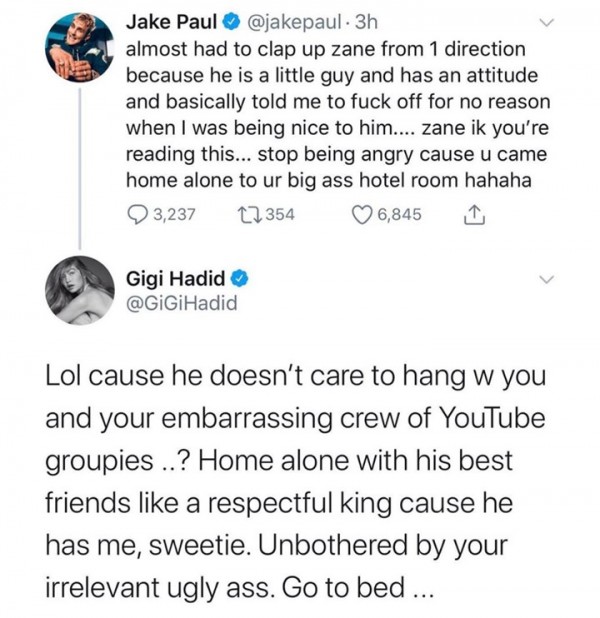 Two hours later, the supermodel soon responded with a tweet of her own, saying "Lol cause he doesn't care to hang w you and your embarrassing crew of YouTube groupies?"

"Home alone with his best friends like a respectful king cause he has me, sweetie. Unbothered by your irrelevant ugly ass. Go to bed," Gigi finished off her tweet.

Before this exchange, the singer was in good spirits as he watched Tyson Fury versus Deontay Wilder at the MGM Grand Arena. He even shared a photo of the match on Twitter with the caption, "@Tyson_Fury proud to be a Brit. What a night... incredible night."

Gigi & Zayn Back Together For Real

Hadid's tweet comes as confirmation for fans that the couple is indeed an item once again. The pair first started dating in 2015 before splitting in 2018 and reuniting months later.

In January 2019, Gigi and Zayn broke up once again but sparked reconciliation rumors just last month when they were spotted holding hands in New York.

An insider told Us Weekly that the couple are indeed rekindling their romance after a year-long break.

According to their source, "They got back together very recently. They have been trying to make it work for three months, but it has been slow and steady."

Gigi Hadid recently confirmed speculations that they were back together with a sweet Valentine's Day tribute to her British boyfriend.

"HEY VALENTINE," she captioned a solo pic of Zayn taken on a disposable camera and posted on her other Instagram account Gisposable. "Z on the farm. Dec 2019."

The couple has a history of defending each other on social media.

In 2018, the blonde bombshell addressed rumors that her relationship with the "Pillowtalk" singer was fake, asking fans to just stop as she does not want the negetivity.

After that year, Zayn called Gigi "the most amazing woman" after fans thought he shaded her while they were temporarily on a break.

Knowing that Bella Hadid belongs in a family full of supermodels, rumors still questioned her physical looks, whether or not she had ever gone under the knife.

Gigi Hadid pays tribute to her beau, Zayn Malik, as they celebrate his 28th birthday.

Anwar Hadid admitted that he would not line up to be injected with COVID-19 vaccine.

Bella Hadid celebrated her 24th birthday in a big way.

Despite the older Hadids being the first ones to have the spotlight shine on them, these days, Gigi and Bella Hadid are the ultimate stars of the family.