Fans were glued on their screens to watch the eight-part season of the famous gang's attempt to take out gold from the Bank of Spain.

Money Heist Season 4 has been a roller coaster of emotions for fans. It was filled with action-packed scenes against the bank security named Gandia (played by José Manuel Poga). The gang also mourned for the loss of one of their key members, Nairobi (Alba Flores).

Part 4 ended with The Professor (Alvaro Morte) once again tricking the authorities and taking her love interest, Raquel Murillo a.k.a Lisbon (Itziar Ituño), from the police custody and successfully taking her inside the Bank of Spain.

Shortly after celebrating their small victory, the Professor was caught red-handed by the heist's negotiator, Alicia Sierra (Najwa Nimri) who was earlier relieved from her post due to her exposed torture activities against Rio.

Since the entire season is left hanging, the big question of fans right now is: will the hit Spanish series get another season on Netflix?

The answer is yes! Although the streaming giant has yet to officially announced that La Casa De Papel had been renewed for another season, all signs point to a continuation -- especially after the hints dropped by the key members of the show.

According to the Spanish site Marca, the renewal agreement of the show was a done deal even before the fourth season became available on Netflix.

"Chapter by chapter, sequence by sequence, line by line," he added.

The script coordinator also revealed that if they only knew that the international audience would widely receive the show, things would have been different for the deceased character Berlin (played by Pedro Alonso), who is a known fan-favorite.

"We do not ever consider how long the show can last. If we got to know the scope of the phenomenon, we wouldn't have thought to kill Berlin," Javier said.

"We killed it too much, and there is no way to revive it," he added.

Meanwhile, Money Heist creators also dropped some hints of possible spinoffs from the lead characters of the show.

"We do have many possibilities for some spinoffs, yes, and I think that's thanks to the strong and powerful identities of the characters," Alex Pina told Oprah Magazine.

"Berlin's case for his own show is very clear; he's a misogynist, a psychopath, egocentric, a narcissist, a delinquent, a rapist. But still, there are lots of people who adore him because he values friendship, loyalty, or fraternity."

Netflix usually announces the renewal of each series a month after a new season drops, depending on how the viewers received it.

One of the reasons why the streaming giant has yet to confirm Money Heist Season 5 and 6 is due to the current global pandemic which has also halted some production process.

Although Netflix has yet to confirm it, the Tokyo portrayer may have shared the good news earlier among her TikTok followers. She wrote that Season 5 and 6 were already approved before later deleting her post. 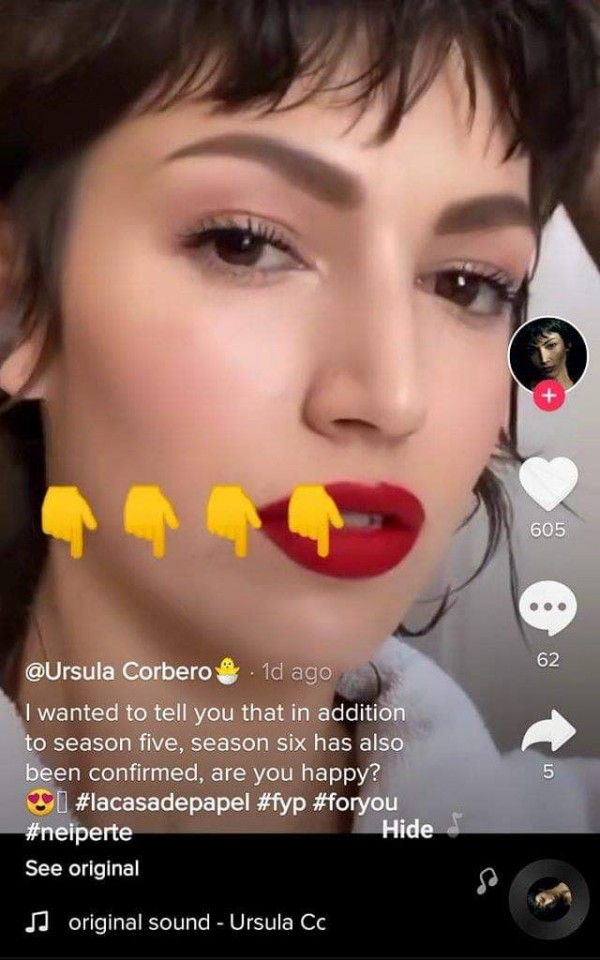 Tags: Money Heist La Casa de Papel netflix
© 2021 EnStars.com All rights reserved. Do not reproduce without permission.
Most Popular
You May Also Like

Fans will not be getting "Money Heist" season 5 this spring, but that wouldn't stop them from forming theories and finding clues before its release date in August.

Fan theory predicted the possible plot twist to the upcoming season of 5 of Money Heist.

The heist will come to an end soon in Netflix's "Money Heist" Season 5.

Money Heist Season 4 just dropped, and it did not disappoint once again.

In an Instagram post on Sunday, "Money Heist" key cast Itziar Ituño told her followers that she is unfortunately now one of the carriers of COVID-19.

Netflix drops the Season 4 trailer of "Money Heist" after almost eight months of waiting since the third installment last July 2019.