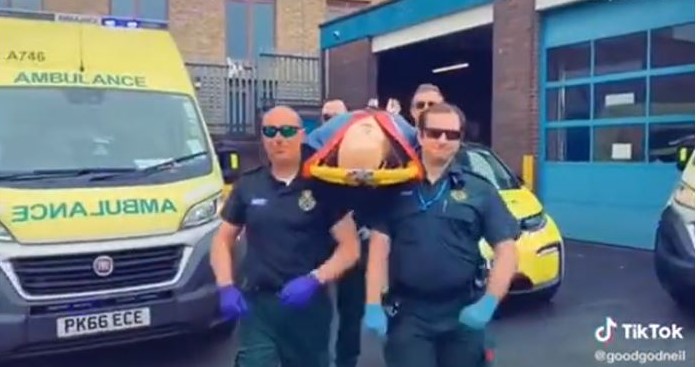 Members of the North West Ambulance Service in the United Kingdom received a massive backlash after recreating a viral TikTok dance while incorporating it to their job as ambulance workers.

In the 30-second video, a man pretending to be unwell coughs while at the back of an ambulance. The music of the famous "TikTok coffin dance" started playing in the background. It suddenly showed a group of ambulance workers in complete uniform and sunglasses preparing to "send off" the guy.

Four ambulance workers were then seen holding a CPR dummy on a stretcher before they begin dancing like the viral pallbearers in Ghana, who are giving a cheery send off to a deceased loved one. Since the coronavirus global pandemic started, the 2017 viral video resurfaced in the internet.

In anoher scene, the ambulance workers bounced the stretcher up and down their shoulders while waving white handkerchiefs and cheering for the supposed dead body.

While the short clip is meant to give viewers a good laugh, some internet users said it is an inappropriate and inconsiderate move, especially for the feelings of the people who lost their loved ones due to the COVID-19 outbreak.

But can they please stop these ridiculous videos. They’re toe curling in their insensitivity. If these people want to make videos they should do it on their own time. https://t.co/3qSXWVCumb — Voice of Reason (@brexitblog_info) May 7, 2020

WTAF are these idiots doing? I mean I know you have to have a laugh to get through things but this is so fucking disrespectful. Shocking!! Ambulance workers blasted over TikTok coffin dance https://t.co/mjpZphGJGX via @MailOnline — jon parry (@jonparry35) May 7, 2020

So North West Ambulance Service, UK has apologized for that TikTok video? How could emergency service providers dance to a trending coffin meme, surely? Very unprofessional! — ENOCK BETT (@ThisIsBett) May 8, 2020

The ambulance service immediately turned down the video. They apologized and explained that the staff meant no offense in the viral clip.

"Although we understand the staff involved did not mean to cause offense, this video is inappropriate and a clear breach of our social media policy. It has now been removed," a North West Ambulance Service spokesperson told the "Liverpool Echo."