Four-time Super Bowl MVP Tom Brady has just proven that he can handle major blunders -- a.k.a. wardrobe malfunction -- with class.

The charity game was aimed to raise funds for COVID-19 relief efforts to help frontliners, health workers, small business owners, and those vulnerable people who were affected by the global pandemic.

Interestingly, during the 30 minutes of the live broadcast, the fundraising event was able to raise more than $1.5 million while the overall match raised over $20 million for COVD-19 relief.

"Knowing that $20 million was raised is amazing," Manning told TNT. "It was an honor to be invited to this, and it's something I will always remember and cherish."

Tom Brady Gripping And Ripping It!

However, things turned a bit awkward when the Tampa Bay Buccaneers, who was playing alongside the 49-year-old Mickelson, accidentally ripped his pants upon trying to retrieve his ball on the seventh hole.

As what professional athletes do, the football star continued the game despite his wardrobe malfunction.

He then took to social media to acknowledge the biggest blooper of the day.

"Pants wanted in on social distancing I guess..." he tweeted, about the coronavirus restrictions.

Brady also followed his post by mentioning that he has learned his lesson to wear golf pants. "Next time I'll make sure to be wearing my @UAGolf pants #LessonLearned."

One user pointed out that despite having a good shot, the famous athlete might need help from a seamstress.

"After his first good shot of #TheMatch, Tom Brady is going to need a new pair of pants or a seamstress. Right down the crack." 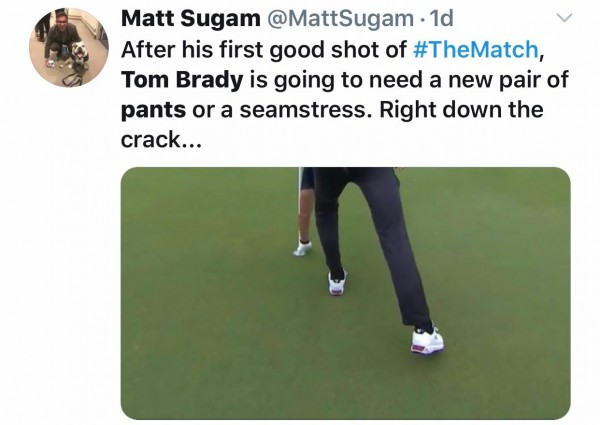 Another one stressed that someone has to play a good samaritan and give Brady a pair of trousers.

Another netizen even speculated how the NFL quarterback ripped his pants.

"The reason @Tom Brady split his pants is because carrying the patriots on his back all those years worked his gluteal muscles. Hence splitting his pants, due to him having a fkn wagon."

Aside from his blunder , the former New England Patriots quarterback congratulated Woods and Peyton for their victory despite having less than ideal playing conditions and terrestrial rains.

"Congrats to @TigerWoods and Peyton for a hard-fought victory and thanks to @PhilMickelson for coaching your boy and keeping us in it. Now...back to my day job," he wrote.

Furthermore, apart from his recent incident, the new Buccaneers star has made it to the headlines after two separate occasions of trespassing.

Last April, Brady mistakenly entered a resident's home in Florida, believing that it was the home of Buccaneers offensive coordinator Byron Leftwich house.

Following the incident, he was caught trespassing in a closed park before he was told by a staffer that it was closed due to coronavirus restrictions.

Tags: Tom Brady Tampa Bay NFL. tampa bay buccaneers buccaneers The Match NFL.
© 2022 EnStars.com All rights reserved. Do not reproduce without permission.
Most Popular
You May Also Like

Tom Brady earned mixed reactions from fans as he received his first shutout in 15 years.

Is Tom Brady divorcing his wife Gisele Bundchen as the athlete fails to be successful outside the field?

Tom Brady took a massive step toward Super Bowl by extending his contract with Tampa Bay Buccaneers this year.

Following Tom Brady's epic throw and his drunken state of mind, LeBron James had an epic response to what he just witnessed.

After winning the Super Bowl 55 against the Kansas City Chiefs, it's only fitting for the Buccaneers and Tom Brady to have a great time after months of strict workout, practice games and more.

One of Tom Brady's teammates roasted him for his taste in music and suggested that perhaps he could use some help.

Tom Brady's Parents 'Sick as a Dog' Due To COVID-19: How Did Buccaneers QB React?

Even Tom Brady's father and mother became victims of the dreaded COVID-19.