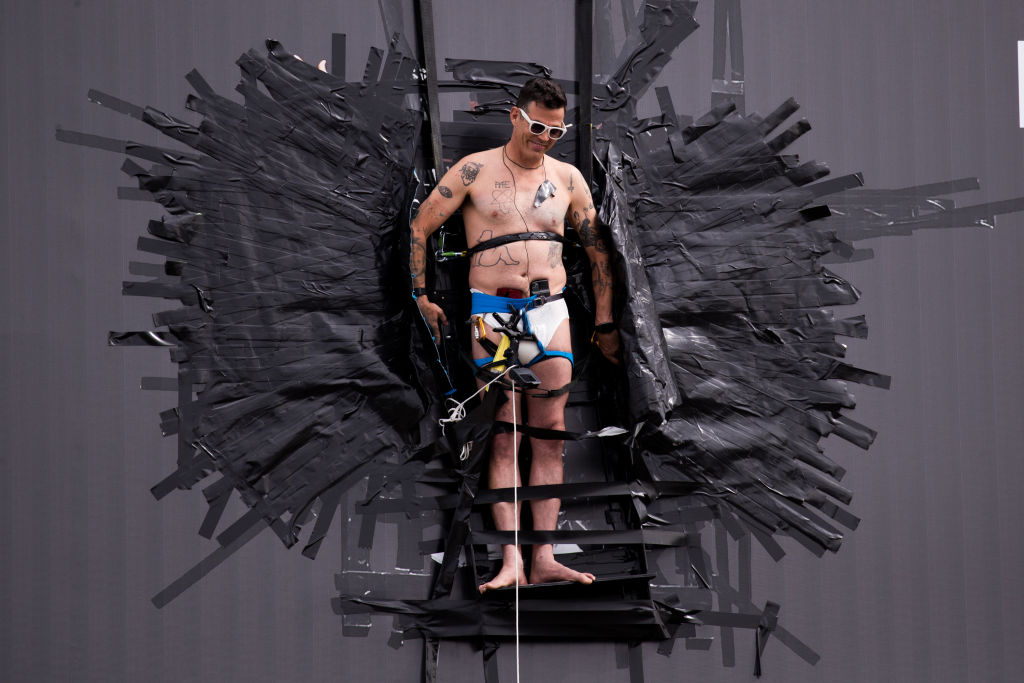 Steve-O made passersby drop their jaws with a crazy and scary stunt.

On Thursday, Steve-O went all out to gain attention for his Gnarly comedy show, so much so that he taped and plastered himself to a billboard in Los Angeles.

Gnarly is described as "a very naughty multimedia special" that mixes stand-up comedy and Jackass-style stunts. Apart from Steve-O, it also features cameos from several members of the Jackass crew, including Bam Margera, Wee Man, Chris Pontius, and Johnny Knoxville.

The clips are also available for stream on Steve-O's website for those who are 18 years of age or older.

But to give people a glimpse of what those stunts look like, Steve-O posted a photo of him on Instagram showing him duct-taped to a billboard. He added more thrill by only stepping on a little platform.

Since he let his arms free, it gave him the chance to write the caption himself and typed in, "I'm attached to a billboard right now (swipe to see the whole thing) and want to emphasize that a team of real professionals rigged everything safely."

However, he assured fans that there is zero chance of him falling before adding that he did not want to waste any city resources on his stunt.

Furthermore, his co-Jackass crew member Knoxville can be seen standing near the end of the trailer kicking Steve-O's crotch.

Steve-O then posted follow-up videos on his Instagram story, confessing that he was starting to feel a little tired and sore after an hour and a half of standing on the billboard.

Cops also showed up to monitor the situation and ensure his safety.

"They say they're not sure that I'm committing any crimes," Steve-O said. "I don't think so. I paid for the billboard, man!"

Meanwhile, the Los Angeles Fire Department helped him to remove himself from the Billboard. They also confirmed that they were at the scene and they shut down lanes until they completed the apparent rescue operation.

The stunt surely brought a huge laugh to his 5 million followers, as the post already reached over 300,000 likes since its posting.

Steve-O's followers also left remarks on the comments section, most of them thanking him for making them laugh.

One fan said, "I love u so much steveo, off ur head mate (ps I've been sober 4 months today and a huge part of that is credit to you) ok that's all x." [sic]

"Now I really have to go watch gnarly. That advertising was stuck up," another one wrote, before someone asked, "Where is this? Haha love it! How long will you be there?"

The official Instagram page of Savage also joined the commotion and wrote, "You might wanna fasten you're seatbelts for this one and be sure to watch it with your parents."