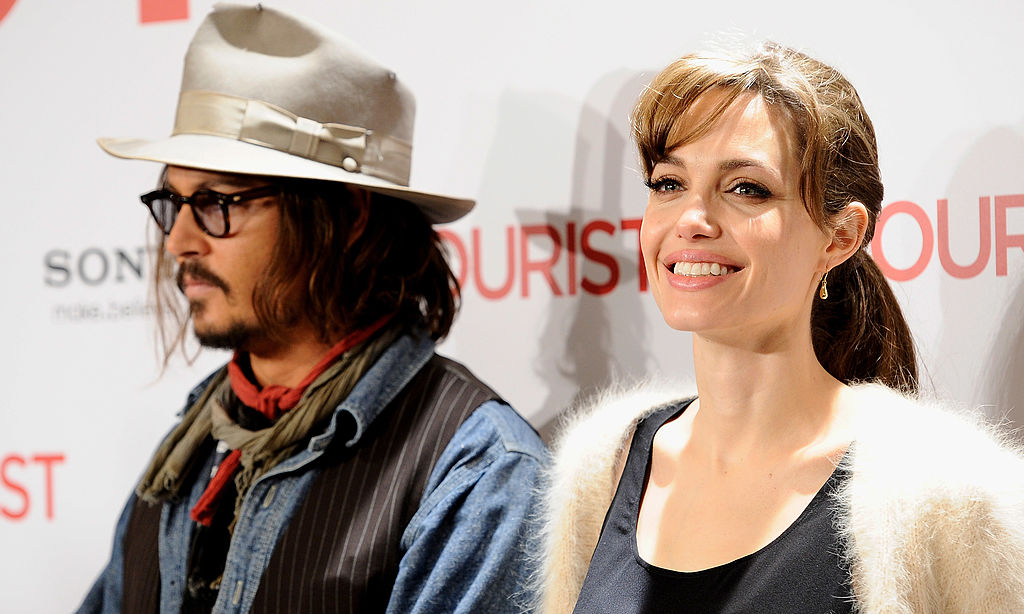 Johnny Depp and Angelina Jolie were once the Hollywood royalties. Now, they're the top Hollywood outcasts.

In an alleged desperate move to save their careers, Depp is reportedly "chasing salvation" with Jolie, according to the Globe's November 30 issue.

This meant that the "train-wreck" Depp is hoping to hook up with Jolie because they are both outcasts.

The pair first started flirting while filming on their movie "The Tourist" back in 2010.

At that time, the "Edwards Scissorhands" star was still in a relationship with Vanessa Paradis, while the "Salt" actress was still tied to Brad Pitt.

The 57-year-old allegedly reached out to the mom-of-six recently to "jumpstart" their friendship by hooking up.

An insider dished to Globe, "He's been sending her poems written with her in mind and suggestions for books to read and music to listen to."

"They've exchanged a series of emails and texts and talk on the phone quite a bit."

The source continued, "It's gotten very flirty at times, so Johnny has hope tow in her heart, and they're making plans to meet in Los Angeles very soon."

More insiders dished to the outlet that Johnny Depp and Angelina Jolie shared common ground after being dragged through the mud in different court cases.

The "Maleficent" star is currently battling with ex-husband Brad Pitt for child custody, while the "Pirates" star lost his libel case against British tabloid, The Sun, that branded him a wife-beater.

"Johnny's convinced he and Angie would be great together. It'll be sweet revenge on their exes and bring them great exposure in the process," the insider claimed.

However, currently, the ball is said to be on Jolie's court.

"She's open to having a little fun - but don't count on her getting too serious."

Though the pair may look good as a couple, they are too busy focusing on their battles at the moment.

The famous "Harry Potter" franchise film, "Fantastic Beasts" axed him after it was determined he physically abused his ex-wife Amber Heard "at least a dozen times."

In a statement Depp shared on his Instagram, he revealed that he was asked to resign by Warner Bros. from his role as Grindelwald.

According to reports, Johnny Depp earns about $20 million for each of the movie's spin-off.

He was alsoremoved from the Disney pirate movie franchise, "Pirates of the Caribbean," after Heard first accused him of domestic violence.

Despite losing the trial to The Sun, Depp continues to maintain his innocence.

"I intend to prove that the allegations against me are false. My life and career will not be defined by this moment," he said in his statement.

This trial and along with their divorce agreements have yet to be finalized despite separating legally in 2016.