Patrick Mahomes on Facing Tom Brady: 'It's Going To Be a Special Moment'

Kansas City Chiefs quarterback Patrick Mahomes visited 610 Sports Radio to talk about their latest victory against the Buffalo Bills and his chance to play against Tom Brady.

Considered as one of the best quarterbacks today, Mahomes has also previously expressed his interest to match the legendary Tampa Bay Buccaneers quarterback. Brady, heading to his 10th Super Bowl appearance, is poised to earn his seventh ring at 43 years old. 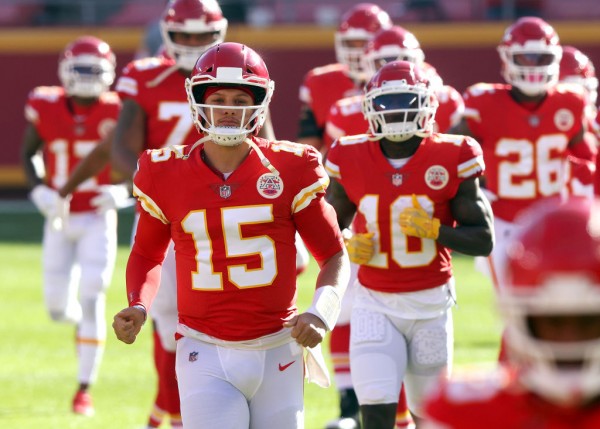 (Photo : Photo by Jamie Squire/Getty Images)
KANSAS CITY, MISSOURI - DECEMBER 27: Quarterback Patrick Mahomes #15 of the Kansas City Chiefs leads players onto the field prior to the game against the Atlanta Falcons at Arrowhead Stadium on December 27, 2020 in Kansas City, Missouri.

"I'm excited for the opportunity to go up against the GOAT"

In his RADIO.COM interview at "The Drive," also broadcast at the 610 Kansas City Sports Radio in the area, Patrick Mahomes shared that his showdown with Brady in Super Bowl LV will be special.

"To go up against Tom, all the success he's had, it's going to be a special moment," Mahomes shared. "I'm excited for the opportunity to go up against the GOAT."

Should Mahomes succeed against Brady, he will be the first quarterback in NFL history to win two Super Bowl rings at only 25 years old. He will be surpassing Brady's record of two rings at 26.

However, he recognizes that the difficulty that awaits him, stressing that "anything you do you want to go in and be most successful." He acknowledges the difficulty of earning 10 Super Bowls and having six rings.

"You have to understand you have to go about doing whatever you can to be that type of person and the best player that you can be," Mahomes added in the RADIO.COM interview. "For me, I understand the team I have around me and the opportunity we have going into this game and we have to try and maximize it as best we possibly can."

Born Patrick Lavon Mahomes II, he started his NFL career at the 2017 draft where he ended as the 10th overall pick for the Chiefs. He began his rookie season in the league as a backup to Alex Smith, up until Smith was traded to the Washington Redskins in 2018. Mahomes then joined as a starter the following season, throwing a total of 5,097 yards and posting 50 touchdowns and 12 interceptions, setting a career record. Aside from Mahomes, only Peyton Manning has made 50 touchdowns and thrown more than 5,000 yards in a single season.

In the 2020 NFL Playoffs, Mahomes famously led the Kansas City Chiefs to the Super Bowl LIV, ending the 50-year drought for the football team. Furthermore, they defeated the San Francisco 49ers and the young quarterback received the Super Bowl MVP, only the second African-American QB (after Doug Williams) and the youngest to do so.

Also, aside from his professional football career, he also played college baseball in his freshman year at Texas Tech University, quitting the following year to focus on football. He is the son of former Major League Baseball pitcher Pat Mahomes, who pitched for a number of teams including the Boston Red Sox and the Chicago Cubs.

Tags: NFL. football college football super bowl
© 2022 EnStars.com All rights reserved. Do not reproduce without permission.
Most Popular
You May Also Like

It was recently reported that the Dallas Cowboys quarterback Dak Prescott had been fined by the NFL following his comment related to game officials.

Malik McDowell has just made himself in trouble as the police found him fully exposed, leading to his arrest on Monday, January 17

A report has been made regarding Nate Hobbs expected return to the football field after his recent DUI case last Monday, January 3.

NFL Star Nate Hobbs Arrested a few Hours After Team's Big Win; What did the Raiders Athlete Do?

Nate Hobbs of Las Vegas Raiders was recently arrested after failing a sobriety test just a few hours after his team won against Indianapolis Colts.

Mystery Behind John Madden Cause of Death: Legendary NFL Hall of Fame Coach Dead at 85

The NFL confirmed that the legendary Hall of Fame coach and announcer, John Madden, passed away at the age of 85.

Jeff Dickerson Tragic Cause of Death Revealed: ESPN Reporter Was 44

The whole NFL community is mourning after it was reported that the widely recognized ESPN Chicago Bears reporter, Jeff Dickerson passed away at the age of 44.

Teddy Bridgewater Hospitalized Overnight for This Shocking Reason, Will the Denver Broncos Quarterback Be Able to Compete for Next Game?

Avid watchers were shaken after spotting Denver Broncos Quarterback Teddy Bridgewater was sent to the hospital after a shocking injury during their Sunday's loss to the Cincinnati Bengals.

Urban Meyer Fired: What Happened to Jacksonville Jaguars Coach After Career Shortened to Handling Only 13 Games?

Fans have made Jaguars head coach Urban Meyer take the lead on the trending list as reports say that he was fired for his role after only 13 games in the football team.

Demaryius Thomas Dead At 33: Did NFL Star Die of An Illness or Was Foul Play Involved?

Demaryius Thomas, a former NFL player and member of the Broncos, has passed away at the age of 33.