Encanto is Disney's latest animated movie musical is a treasure. Written by the team that brought us Moana - including Lin-Manuel Miranda - this new instant-classic follows the story of Mirabel Madrigal (Stephanie Beatriz), the only member of her gifted family that was not magically blessed with a special power when she turned five. While her sisters are super strong and super graceful, and the rest of her family can do things like heal injuries with food or shapeshift, she's just plain old Mirabel - but she has more power than she knows.

While Encanto is a beautiful and original story about family and Colombian culture like we've never seen before, like all media, it's not immune to the influences of the culture in which it was created - and some of that culture seems to be Harry Potter, because the number of random parallels between this movie and those is too high to all be pure coincidence.

Don't believe us? Here are 8 clear examples of Harry Potter parallels in Encanto. (WARNING: Spoilers ahead.)

Sleeping in a teeny tiny room in a big house

In the first and second installments of Harry Potter, Harry sleeps in the cupboard under the stairs; Mirabel, having been given no gift and thus no super-cool, magically ginormous room, still sleeps in the teensy upstairs nursery.

Being Different from the family

Harry Potter is the only magical being in a non-magic family - besides his mother.

Mirabel Madrigal is the only non-magical being in a magic family - besides her grandmother.

The search for a deliberately hidden prophecy

In Encanto, Mirabel eventually finds out that there was a prophecy that her Uncle Bruno made about her before she disappeared that was never found - but if she wants to figure out what's putting cracks in their magical Casita, she needs to find it.

In Harry Potter and the Order of the Phoenix, Harry is also told he must find a prophecy that was made about him before he could remember - and, like when Mirabel puts together that she is somehow at the center of the cracking dilemma, what he finds is so much worse than what he imagined. (You know, the whole "neither can live while the other survives" thing.)

In Harry Potter and the Chamber of Secrets, Harry and Ron receive a mysterious message from Hagrid telling them they can solve a mystery if they "follow the spiders." Ron, in one of his greatest one-line moments, laments: "Follow the spiders?! Why couldn't it be follow the butterflies?"

Mirabel doesn't have to follow spiders, but she does have to follow a group of rats who stole the prophecy about her in order to find her Uncle Bruno.

More importantly, though, when she DOES find her Uncle Bruno, he finds in another prophecy that she WILL, in fact, have to follow a butterfly in order to solve her problem.

Speaking of Bruno...(even though they said we shouldn't) 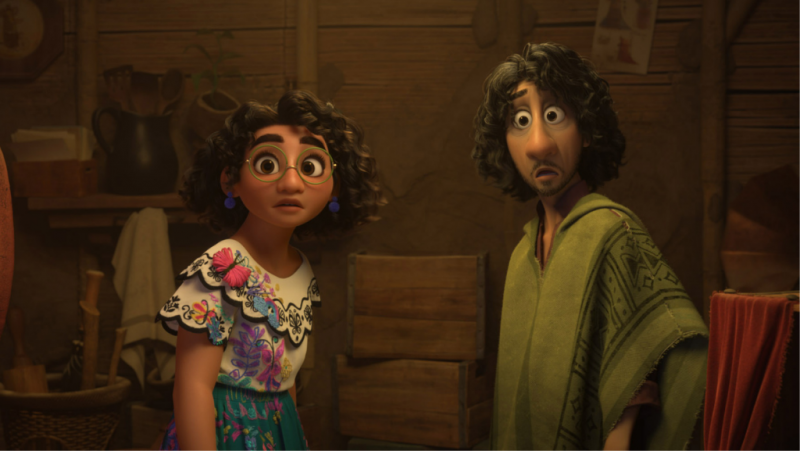 Look at this guy. He was wrongfully blamed for several unfortunate things that happened to his family, and as a result he ran away (though he actually just lives among them in the walls.)

Sirius Black was blamed for the death of Harry's parents, and when he's living on the lam, he actually stays relatively close by, just disguised as a dog.

Also, when Harry finds him, he becomes the father figure he never had...and Mirabel definitely feels a similar sense of kinship with the outcast Bruno.

A house with Personality

One of the main characters in Encanto is inarguably the Casita itself - the family even refers to it by name as though it were as much a family member as the rest of them (and honestly, given that it assists with chores, and literally uses its dying breath to save the Madrigals, it may as well be.)

There's a house like that in Harry Potter too - the Weasley's home, affectionately referred to as The Burrow. They don't get into it too much in the movies, but Molly Weasley is a very talented witch, and she has charmed her house into her own little helper by the time we ever see it. It washes dishes, it knits, it keeps track of where everyone is - and when it Bellatrix Lestrange burns it down in Half Blood Prince, it feels just like a character death.

This is a big one: One of the main themes in Harry Potter is that he was blessed at one when his mother sacrificed herself to save his life. Voldemort murders her, but her love causes Voldemort's spell to backfire so harshly that it kills him.

They don't show it in Encanto, because it's a Disney movie, but we know what happens: Abuelo Pedro sacrifices himself and is killed by the soldiers that destroyed their village, and as a result, the candle he was carrying becomes enchanted and protects his wife, his babies, and everyone else who was trying to get away.

That theme of love being a form of protection is a powerful driver for both stories. 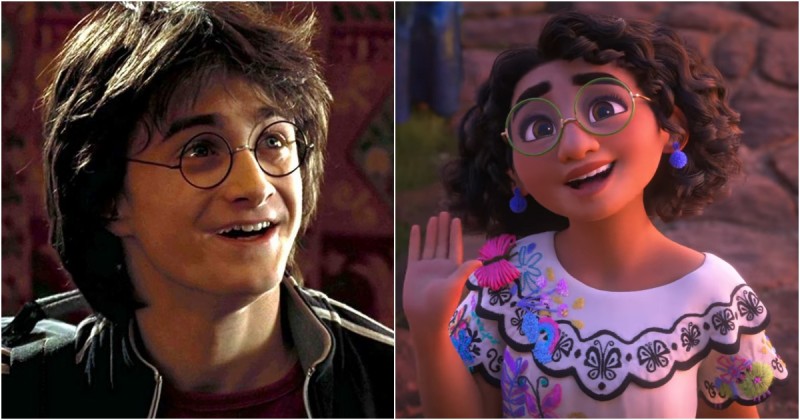 Look at these cute, plucky heroes with their big round glasses! This one probably actually IS a coincidence...but it's a really sweet one.

Tags: Lin-Manuel Miranda Stephanie Beatriz
© 2022 EnStars.com All rights reserved. Do not reproduce without permission.
Most Popular
You May Also Like

Admittedly, some of these would make better sitcoms than they would feature films, but they'd still be fun - and more importantly, they wouldn't be offensive to real-life people with forms of Dwarfism.

Disney seems to have learned not to mess with a good recipe when they find one.

Don't freak out, but there might be a sequel or series coming our way. (Just kidding, OF COURSE you can freak out.)

22 Men Who Are Better Singers Than Jesse McCartney - Yes, Barstool Baited Us Again, But That List Was Just Stupid

Barstool has once again posted an egregiously errouneous list, this one of the "Top 10 Male Power Singers Of All Time," and we have about 22 bones to pick with them putting Jesse McCartney at #3.

8 Awesome Animated Movies That Adults Can Enjoy This January

Everyone knows the days after Christmas are for enjoying your new gifts and generally acting like a kid again. What better way to feel like a kid than with an animated movie?

In an interview with some of 2022's Oscar hopefuls, Benedict Cumberbatch discussed what it was like doing dream analysis with such a prodigious director.

If You're An Older Sibling and You Haven't Seen 'Encanto' Yet, This Song Will Be The Reason You Do

Sound bites from the song 'Surface Pressure' from Disney's 'Encanto' have gone viral on Tiktok for being the big sister anthem we never knew we needed.

Betty White is celebrating turning 100 on January 17, with a movie about her illustrious career, shown in select theaters for one night only.