They do say that distance definitely makes the heart grow fonder, but that might not be the case between Hollywood heartthrob Jamie Dornan and his wife Amelia Warner.

In fact, there are new rumors suggesting the Hollywood actor and his British wife might be having some serious issues in their marriage as they've not only been living on other sides of the world but because Warner might be a tad jealous over reports that say her husband's love scenes with co-star Dakota Johnson are nothing less than hot and steamy.

According to Movie News Guide on Monday, all that "sexual tension" between Dornan and Johnson is a good thing as they are currently filming the sequel to last year's megahit 50 Shades of Grey, 50 Shades Darker. Multiple reports indicated that the two actors are putting in quite the effort as fans were initially worried that their supposed lack of on-screen chemistry might make the movie flop.

Unfortunately for Dornan's wife though, she's stuck back at home in London with the couple's two kids and has no idea what's going on with her husband on his film set in Vancouver. While the couple is yet to confirm the news, reports indicated that she might have given birth to their second child back in January. Dornan hasn't seen much of the tot though as he's been stuck in Canada filming the movie.

So far, Dornan has not made any indication on whether or not Warner plans on visiting him in Vancouver or if he'll take a break from filming to fly back to London to be with his family.

Keep up with Enstars for all the latest news on Jamie Dornan, Amelia Warner and all of your favorite celebrity couples right here. 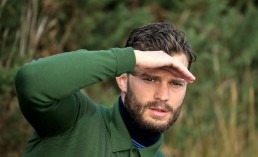 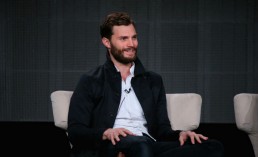