For anyone who was a major fan of 1990's television, this is major news. There's speculation that there's a new celebrity couple that might take the entertainment world, if this turns out to be true.

Sources say that Katie Holmes and Matthew Perry have been getting very chummy with one another on their new miniseries, The Kennedys: After Camelot. The news comes after reports that indicated Holmes' rumored boyfriend, Jamie Foxx, was spotted was getting very up close and personal with a number of women this past week, including a mystery blonde he was spotted with at a hotel lobby in Los Angeles over the weekend.

According to OK! Magazine on Monday, one eyewitness on the set of the film say that Holmes and Perry "really like each other" and that they've been spending a lot of time together behind the scenes as well.

The insider added, "There's a real spark with them. They have had dinner a couple of times and clearly enjoy being with each other."

So far neither Holmes nor Perry have made any comments about the report. In fact, Holmes hasn't even confirmed the news that she's been seeing Foxx for the last several years, too. 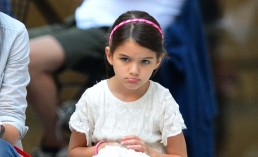