David Beckham and his wife, Victoria, have been facing reports of an allegedly impending divorce for weeks, but judging by the soccer star's recent social media posts, he isn't letting the ongoing rumors get in the way of his love for his family.

Following a sweet message for Harper Beckham, the youngest of the Beckham family, weeks ago for her 5th birthday, David returned to Instagram where he shared a video clip of Harper attending the Justin Bieber concert in London on Friday night.

"At Justin Bieber's Concert #kissesfromthebeckhams," David captioned the photo, which featured Harper singing to one of the pop star's songs.

David and his wife, Victoria, are parents to four children, Brooklyn, Romeo, Cruise and Harper, and have been married since 1999, which is quite a feat for a celebrity couple like themselves.

Weeks ago, David posted a birthday message to his and Victoria's youngest child.

"Happy birthday to my Pretty Lady," David captioned a photo of himself and Harper, who was giving him a sweet kiss on the cheek. "In 5 years baby Harper has brought so much love into our family ... Such a special girl in so many different ways we are so lucky to spend each day with such a beautiful soul ... We adore you baby girl happy birthday love Daddy @victoriabeckham."

To hear what Victoria had to say about her husband and his many tattoos in spring of last year, check out the clip below. 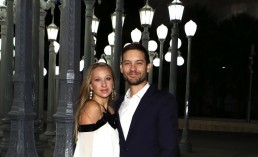