Tameka "Tiny" Harris shared a few words for her husband T.I. on Instagram amid speculation that the two were getting back together.

It started when Tiny posted a throwback photo of herself as a child with a man holding her. She captioned it, "#Tbt Me at 3 I had the best tan when I was little cause I lived at a pool & Myrtle Beach & Jekyll Island.. #WaterBaby #CancerSeason"

T.I. had no shame in asking about the man who had a baby Tiny in his arms.

"Who's that pimp holding you?" he asked.

It didn't take long for Tiny to respond.

"His name is Blu from a group called Manhattans.. 'Let's Just Kiss and say Goodbye' u familiar with that song I know"

At the risk of sounding shady, Tiny quickly added an additional comment and wrote, "Lol no pun intended."

The back-and-forth commenting sparked rumors that Tiny and T.I. got back together after she filed for divorce last year.

They have been seen together since the reports started. They were spotted at the sweet 16 birthday party for T.I.'s daughter, Deyjah.

Apparently, T.I. is having trouble letting go of his relationship with Tiny.

"Tiny and T.I. talk whenever he calls to speak to the boys," one insider told Hollywood Life earlier this month. Tiny moved out of the home she and T.I. shared with their seven children together.

"Tip usually tries to engage Tiny in conversation, but she keeps it pretty short most of the time. She really wants to get on with her life and doesn't want to get dragged back into Tip's drama - she's over that and keen to build a future on her own."

They added that T.I. "can't stand" the idea of Tiny moving on with someone else.

Are T.I. & Tiny Back Together? They Get Cozy In Bed Together [VIDEO] 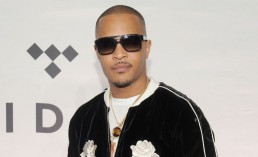 T.I. And Tiny Back Together: Rapper Returning To Television Amid Divorce Drama [VIDEO]