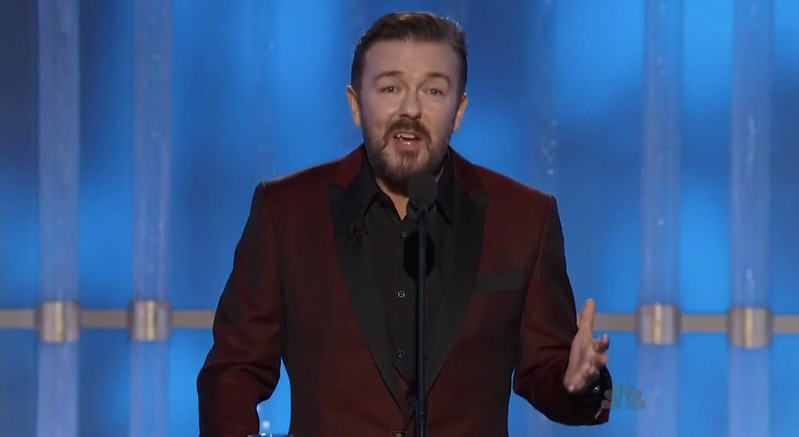 Ricky Gervais capped last year's most shocking news when he hosted the Golden Globes. There was a mix of reactions from the crowd. However, the British comedian was not bothered by criticisms over his final hosting stint at the awards ceremony night.

Among the most untactful comments made by the comedian were in reference to British royalty. In particular, Prince Andrew, son of the British monarch, got a rude mentioning at the Golden Globes 2020.

Prince Andrew was nowhere in sight and had no connections to the awards' night whatsoever. However, the Briton still found a way to bring the contrioversial royalty to the spotlight using whoever was at the event.

Conveniently enough for Gervais, Leonardo di Caprio was there. Caprio is known to date younger women -- as was Prince Andrew. The Duke of York was formerly dubbed "Party Prince" after dating women years younger than him.

Gervais was stressing the point that di Caprio's movie "Once Upon A Time" was too long. So his joke went that by the time the premiere ended, DiCaprio's date was too old for him. It was then that he threw in the Prince Andrew joke saying, "Even Prince Andrew would be like, "come on mate, you are nearly 50, son."

Luckily for Gervais, di Caprio simply shrugged and laughed off the snide remark. He was looking all sports about it, blushing and smiling alongside his date, Camila Morrone, 22.

One of the most groaned-over jokes he made was of Jeffrey Epstein -- the convicted pedophile who was said to have killed himself in jail. Prince Andrew and Jeffrey Epstein have been linked together in a massive exposure in the previous year.

It was previously reported that Epstein had been trafficking underage girls. Further, Prince Andrew was reportedly used to lure women. The Duke was even alleged to have had sex with some of the minor girls. One of the allegations came from Virginia Roberts, who officially filed a case in court.

Gervais mentioned of the pedophile when he was casually talking about his own show "After Life." He announced that a second series was coming and that it was going to be obvious that his character would not kill himself. Then he adds, "Just like Jeffrey Epstein."

The crowd went berserk on his joke when Gervais cleared that he did not care what he was saying since it was his last time on the Golden Globes. He added, "Shut up. I know [Epstein] is your friend, but I do not care."

Some Thought He Was Funny

Though Gervais has gone viral with his nasty remarks, some tougher critics like Joy Behar said she thought the comedian was funny. Whoopi Goldberg may not have been the biggest fan though, saying how the comedian "roasted the A-list audience ranging from political views to dating habits."

However, the most epic reactions came from Tom Hanks. The cameras kept spanning and getting his reaction a couple of times throughout the entire cringe-worthy Golden Globes opening.

On being chosen again, Gervais himself was surprised. He revealed how Kevin Hart got fired from the Oscars over his offensive tweets. Previously, the comedian was known for his transphobic jokes. He added, "Remember, these are just jokes. There is no sequel."