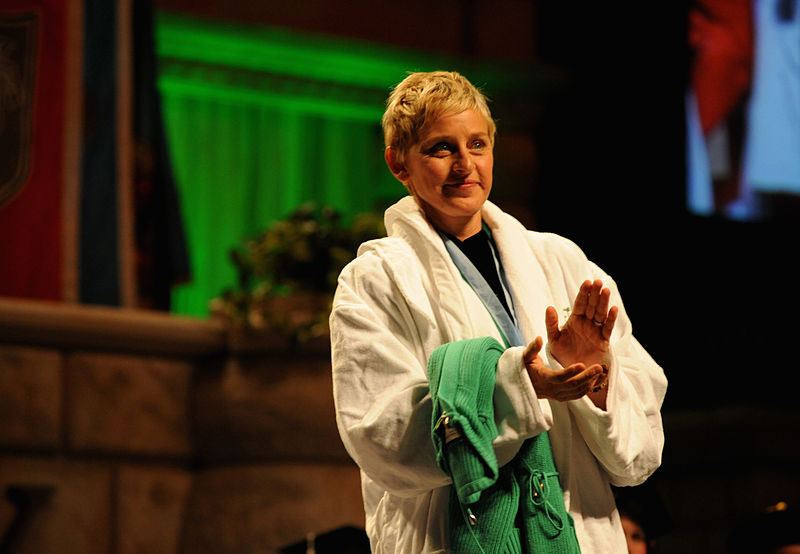 The goofy, playful image of Ellen DeGeneres suddenly disappeared after she started to receive criticisms since the beginning of 2020.

Due to unstoppable issues surrounding her name, a journalist recently called her out and labeled her "desperate" for copying Oprah to stay relevant.

Bernadette Giacomazzo, the author of "The Uprising" series, wrote the article titled "Desperate Ellen DeGeneres Does Her Best Oprah to Stay Relevant" on CCN. In the article, she expressed her disgust over DeGeneres' desperate move.

"Amidst rumors of her show being canceled, Ellen DeGeneres makes yet another bid for relevancy," Giacomazzo wrote. "DeGeneres is handing out shows to influencers like they're candy. But is this really necessary?"

She added that DeGeneres might be trying to follow her friend Oprah's footsteps, who made a name for herself in the entertainment industry by starting her own network.

Ellen's show continues to experience a plummeting rating due to the scandalous rumors surrounding the host's name. Furthermore, TVNewsCheck confirmed that the show has recently plunged to an all-time low in ratings.

Meanwhile, Giacomazzo mentioned how this move would only repeat history.

For what it's worth, Warner Media Group announced the establishment of EDN in 2016. However, all the shows launched under the network never did great.

"Ashley Graham had a show. "The Cousins" - who got sued out of existence on HGTV - had a show. And for some reason, Ellen's resident DJ had a show," the author slammed DeGeneres. "None of these shows ever created a hit for any of its "stars." It certainly didn't do any favors for Ellen DeGeneres."

What The Rumors About DeGeneres Say

The year has been really ugly for DeGeneres.

In January, Dutch beauty YouTuber Nikkie de Jager, also known as NikkieTutorials, visited the show. She discussed her experience as a transgender woman after caming out the month prior.

However, De Jager did not have the best experience. Later on, she revealed on the Dutch talk show "De Wereld Draait Door" that her time in Ellen's show was really awful.

"Let me say that there's a big difference between this show and Ellen DeGeneres, and I'm saying that in favor of this show," dD Jager told the host Matthijs van Nieuwkerk. "It's nice that you say 'hi' before the show. She didn't."

Her statement has been translated by YouTuber Sebastian Williams, a native Dutch speaker. Since then, netizens continuously attack DeGeneres.

Meanwhile, a comedian named Kevin T. Porter crowdsourced on Twitter in March 2020 and asked for stories about DeGeneres being mean in exchange for $2 donations to the Los Angeles Regional Food Bank.

As of writing, the tweet has over 2,600 replies and 17,000 retweets, and netizens have a good read because of the stories on it.

"My sister worked for the Ellen Show for two years. This is from her: "I saw Ellen in the hallways every day and would say hello and she never once said hello back. She wouldn't smile. She wouldn't even acknowledge me at all. For two seasons," one Twitter user said.

Another one wrote, "Karen Kilgariff was her head writer for 5 years until the writers' strike. When Karen wouldn't cross the picket line she was fired and Ellen never spoke to her again."

DeGeneres is facing an endless list of criticisms, and indeed, it will take a lot of work for her to be relevant again in people's eyes.