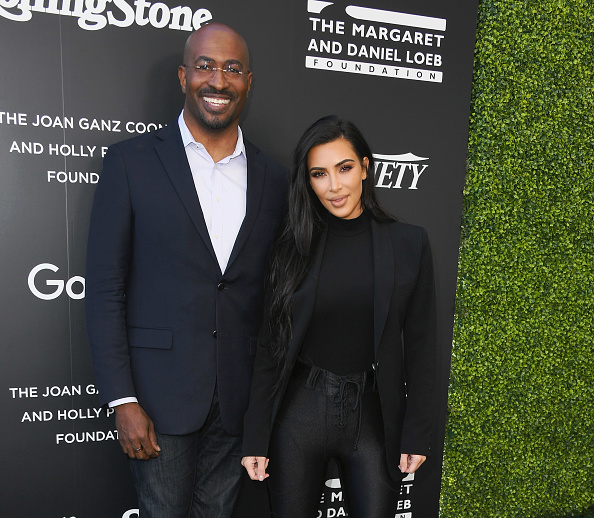 Did Kim Kardashian find herself a new boyfriend amid her ongoing divorce from Kanye West?

The 40-year-old mom is being linked to CNN reporter Van Jones.

The pair have been friends for years, but fans are now speculating that their friends have turned into something romantic as she continues her four-year law apprenticeship with Jones' Oakland-based nonpartisan organization.

He and the reality star may have grown close together when Kardashian became involved in campaigning for criminal justice reform in 2018.

Rumors of them dating initially originated in early January amid news of Kanye West and Kim Kardashian split.

But it only fueled after Page Six said they have a "cute 'Legally Blonde' love match."

They expanded the rumors saying, "He maybe even influenced her politics."

"I will not wait while everybody tells me I don't know what I'm talking about."

Though fans on Twitter couldn't help but be happy for the "Keeping Up With the Kardashian" star, there are still fans who are divided by the idea of them as a couple.

Many accused the KKW Beauty mogul of using Jones to "further her law career."

One fired fan said, "People are gonna look at Kim as using Kanye to advance her in the fashion world and using Van Jones to help advance her into her next career field in law."

Another said, "If Kim Kardashian marries Van Jones I'm no longer doing this whole life thing. That will be simply too much for me."

READ ALSO: Will There Be A KUWTK Spinoff of Kim Kardashian's New Life As A Single Mom?

Who Is Van Jones?

52-year-old Van Jones is one of the most recognizable figures in the US networks.

He's also a New York Times best-selling author and an Emmy Award winner. Jones served as former US President Barack Obama's special advisor in 2009 and has founded several non-profit organizations along the way.

Van Jones is the CEO of the REFORM Alliance, an initiative founded by Meek Mill and Jay Z to overhaul the Justice System.

He and Kardashian worked together to get Alice Johnson's pardon from a life sentence in 2018 that stemmed from a 1996 conviction on non-violent drug charges.

There have been many rumors that Kardashian and Jones are in a relationship, but sources told the Daily Mail that they are not.

The pair has a long working relationship and has the same interest, specifically in criminal justice reform.

Additionally, an insider told Hollywood Life that the SKIMS mogul isn't ready to date just yet as she would want to focus on her side hustles and her kids.

She will eventually get married, but not right now.