Venom: Let There Be Carnage Is A Laugh-Inducing Action Packed Blast

After a lackluster first outing with Venom in 2018, Tom Hardy is back as the titular anti-hero with Venom: Let There Be Carnage and this time around plays as a vast improvement from the original. From casting to comedy, every aspect of the character(s) if fully fleshed out, sharp as a tack, and bombastically immersive. But how did they get it so right? Let's break it down.

Right off, the vision for the movie is tight and not overly written. Unlike most comic book films, Let There Be Carnage plays out as a straightforward narrative of good guy verses bad guy (and a bad girl, in this case). The viewer isn't forced to sit through a litany of seudo-science terminology and a vast explanation of every moment in the history of comic book series. It gets you in, tells the story they want to get across, and does it in a blissfully perfect 90 minutes, bucking the needless trend of making every movie as long as Doctor Zhivago. A feat which hasn't happened with a Marvel property since Fantastic 4: Rise Of The Silver Surfer from 2007, which clocked in at a mere one hour thirty-two minutes. 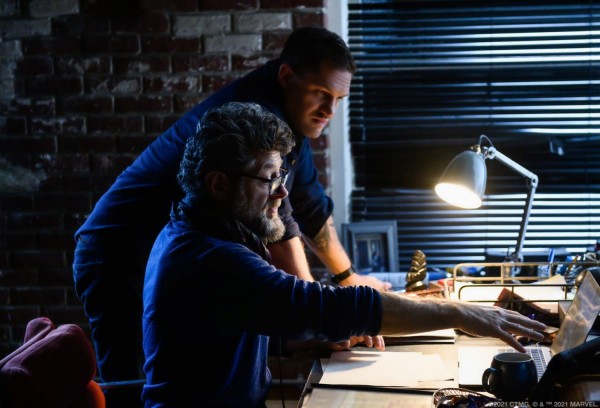 The second brilliant move was to bring in the Master of Mo-Cap, Mr. Andy Serkis, to helm the project. Who better to direct a movie about alien goop monsters than a man who has literally been on screen more often as a CGI character than actually appearing as himself? His sense of knowing how to stage non-tangible creatures and making them believable shines throughout.

Third is the brilliant casting. Hardy seems much more comfortable in the role of both Eddie Brock and Venom, who he voices as well. The power dynamic between the two characters feels real and lived in, allowing for laugh out loud, almost slapstick, moments between them. And then there is Woody Harrelson. Tapping into his past role as Mickey Knox in Natural Born Killers, Harrelson takes the part of serial killer Cletus Kasady for a maniacally perfect walk, joyfully chewing the scenery with every second he has on screen. Other stand outs come from Michelle Williams, who I'm not sure has ever smiled this much in a performance, while Reid Scott of Veep fame does a stellar job playing the comedic everyman. Opposite of Woody is Naomie Harris as Frances Barrison aka Shriek, a fellow lunatic and love interest of Kasady with the ability to use her voice as a weapon. Harris does well to keep up with Harrelson's insanity, but he proves to be a tough act to follow.

But what is the movie about?

Venom: Let There Be Carnage takes place a few months after the events of the first film. Reporter Eddie Brock (Hardy) is now living with his symbiote sidekick Venom in what director Andy Serkis talks about as an odd couple relationship.

In this movie, it's like the seven-year itch in the cycle of a relationship. You've got two characters that are literally stuck with each other. That odd couple relationship was what this movie was always going to be about, as a progression from the first one. It's like living with an over-sized toddler.

The characters of Brock and Venom play off each other in a buddy cop comedy sort of way, with their opposing personas constantly butting heads while still needing each other to get through the inciting incident. In this case, serial killer Cletus Kasady who, after being interviewed by Brock, is given the death penalty when Venom uses his infinite alien knowledge to uncover the location of the missing bodies of Kasady's past victims. While doing a final interview before Cletus' execution, he bites Eddie on the hand, causing Kasady to imbibe some of the alien substance which Venom is comprised of. Now weilding the powers of a nearly indestructible shape shifting behemoth, Kasady uses his newfound abilities at free his love (Harris) from a black site prison and pay back the man who put him on death row. Simple.

The movie moves at a clip, never wasting a minute of runtime. Every set piece is used to with care, showcasing a bevy of monster fights, choreographed with the viewer in mind. The action, being performed by mostly CGI creatures, is understandable to the eye, even when they're throwing each other through buildings and fireballs. You know who's who, and who's doing what during the ensuing chaos without getting eye strain in the process.

A quick warning for our more aurally sensitive moviegoers, this is probably one of the loudest experiences to hit the cinema in a while. Every time Harris takes a breath before unleashing her sonic vocal abilities, the audience will more than likely cringe in delight at the deafening sound design booming from the theater speakers.

One of the biggest takeaways from Let There Be Carnage is the way the screenplay uses the symbiotic relationship of Venom and Brock to create believable tension. The moments between them feel as real as it would if there were two actual people playing off each other. Venom is funny and sarcastic, while Brock is almost a straight man for the creature's antics. Almost sitcom like in execution, the dialogue is quick, laugh inducing, and, somehow, heartfelt. Hardy makes you care about a gaped-jawed alien who craves human brains. When is the last time you could say that for a movie?

And now, for the part all of Stan "The Man" Lee's Mighty Marvelites have been waiting for. Yes, true believers, there is a mid-credit stinger scene, and yes, it's a biggie. Not to go too far into spoiler territory, but let's just say it garnered a big applause break from everyone in attendance.

Top to bottom, Venom: Let There Be Carnage is a blast. Everyone involved knew how ridiculous a premise like this could be and rather than take itself too seriously, they lean into the skid, hard, and the result is better than I could have imagined. Half expecting to just show up for Woody Harrelson being Woody Harrelson, the entire cast brings their A game in a big bad way. This is more than a just a comic book flick. Venom: Let There Be Carnage is exactly what comic book movies should be. Fun.

Venom: Let There Be Carnage hits US theaters everywhere on October 1st.

Welcome back to The Enstarz 8: your pop culture cheat sheet! It's honestly amazing how much happens in 24 hours (give or take a few).

'Venom' Best Movie of the Year? #VenomLetThereBeCarnage Trends Because of Mysterious Post-Credit Scene

"Venom: Let There Be Carnage" seemingly gave its first viewers the outcome no one expected to see, and it was something shocking and thrilling.