The newest edition to the Marvel Cinematic Universe, Eternals, made an impressive splash. Domestically, the new film reported a $71 million dollar opening weekend. This makes the new MCU standard the fourth best opening of the year. Fans were unsurprised by the roaring success of the film. They were, however, surprised to see former One Direction member, current super star Harry Styles featured in the bonus scene.

Chloe Zhao, the director of the new phenom, knew right away that she wanted to cast Styles in the bonus scene of Eternals. She cast the singer as Thanos' brother, Eros. She had kept her eye on Harry Styles since his powerful performance in Dunkirk. Zhao spoke to Deadline saying:

It wasn't like I suggested Eros, and let's go find actors. I kept tabs on Harry since Dunkirk, I thought he was very interesting. After meeting him I realized he is that character- the same way I cast the rest of my cast. There's so much of Eros in him. For me, if he says yes, and Kevin says yes, then it's a go. And I'm very happy they both did.

Harry Styles in the role of Eros was a non-negotiable element for the Oscar Award winning director. She stated, "Harry as Eros was very much a package deal for me...I pitched the idea of Pip the Troll...and Eros to Kevin a while back, and I love the idea of exploring an Eternal who is beyond Titan and who may have influenced Thanos throughout the years the same way Eternals influenced us, earthlings." This careful casting can also be seen throughout the rest of the bonus scene. It also stars powerhouse talents including Patton Oswalt, Angelina Jolie, Barry Keoghan, Lauren Ridloff, David Kaye, Gemma Chan, Kumail Nanjiani, and Brian Tyree Henry 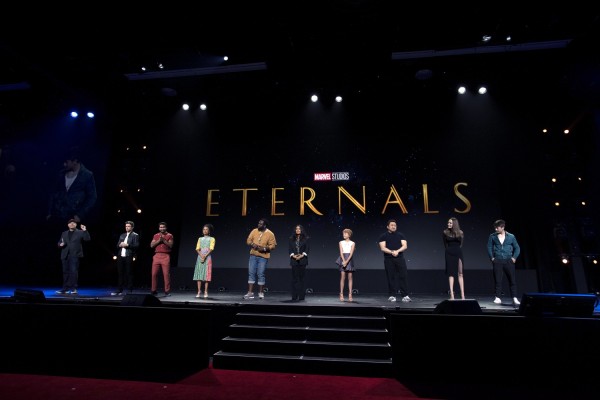 Eternals made its United States debut on Thursday. Be sure to get in to see it as soon as you can!

We're going to put this out into the universe right now: Studio Powers That Be, DO NOT push back these movies or pull them to streaming. Please. We're begging you.

Harry Styles has been offered a big amount of money to perform a few songs but he's willing to reject it for his girlfriend Olivia Wilde; could this be true?

'I Couldn't Be Deterred': Olivia Wilde Talks Perseverance and Power in the Making of Her Movie 'Don't Worry Darling'

"I couldn't be deterred."

Knowing that many concertgoers went to Harry Styles' Love on Tour in Georgia, many were in rage after #JusticeforClaire made it on the trending list, calling out State Farm Arena for their lack of security.

Harry Styles Joins The Marvel Cinematic Universe; What Would His Role Be? [DETAILS]

Harry Styles is reportedly included in the post-credit scene of 'The Eternals,' and he could possibly appear in future Marvel Cinematic Universe films.

It seems like three people on this planet do not like the Harry Styles' Vogue cover, which was published for their Dec. 2020 issue.

Harry Styles is sporting a new look, and fans are not sure if they like it or not.

Harry Styles and Olivia Wilde may be happy with where the relationship is now, but one person isn't.