Michael B. Jordan Credits Finding Love with Lori Harvey As Helping Him Tap Into Roles He Couldn't Before 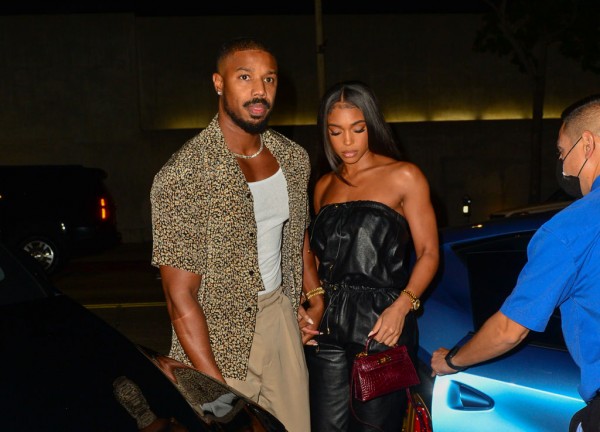 In a new interview with the Hollywood Reporter, superstar actor, producer, and now director Michael B. Jordan reveals how finding love with Lori Harvey has helped him play roles that required more life experience than he had before. Jordan, who is deep in preparation for his directorial debut for "Creed III" and about to promote as the leading man of the Denzel Washington-directed romantic drama "A Journal for Jordan," opens up for the first time about his personal life and about how happy he is with Harvey, the socialite daughter of famed comedian and "Family Feud" host Steve Harvey.

Jordan says, "There are roles that I passed on that I knew I didn't have enough life experience to play. I was like, 'What can I pull from?' But I finally found what love was." This declaration of how love has helped him with his career is a far cry from Jordan's previous admission in a November 2018 GQ Men of the Year interview, where the "Black Panther" actor declares his intent to focus on himself and building his career instead of fixating on dating, despite becoming renown as a bona fide heartthrob.

However, perhaps Jordan's staying away from developing his personal life was the smartest move. In the same Hollywood Reporter interview, Jordan admits, "When I was younger, I don't know if I could have handled the onslaught of opinions and being picked apart, and also being conscious of what the other person's going to go through. It takes a special person to deal with that." Now that he's become more mature, Jordan feels confident in making his relationship with Harvey public.

And, it's hard not to celebrate with him when the actor seems so perfectly smitten with his love, as Jordan shares, "There's a premeditated planning of staying out of the way [of the public eye] that sometimes kills spontaneity and intimacy. I wanted to take that away and give this the best chance it had, in this weird world that we live in, to be somewhat normal." This is a man who has finally found where he wants to be in his life, and we're all happy to see it. Best of luck to Michael B. Jordan as he embarks on the next stage of his career and life!

Tags: Michael B. Jordan Lori Harvey Creed 3 A Journal for Jordan
© 2022 EnStars.com All rights reserved. Do not reproduce without permission.
Most Popular
You May Also Like

Michael B. Jordan Stays Quiet About Possible Return To The MCU

Raising the Stakes! The 'Raising Dion' Season 2 Trailer Executive Produced by Michael B. Jordan and Liz Raposo is FINALLY Here!

"Time to clean up the neighborhood."

Is Denzel Washington Joining The MCU? Michael B Jordan Says He Has A Plan To Get Denzel In Marvel

Is Denzel Washington joining the MCU? Michael B. Jordan certainly wants him to.

'A Journal for Jordan': Denzel Washington's film starring Michael B. Jordan and Chanté Adams is an Unmissable Tribute to Small Moments

"Dear Jordan: I want you to know that it's alright for boys to cry."
'Journal For Jordan' is not a story of grandiose gestures and dramatic moments; it is one of small moments, joyful, sad, seemingly insignificant, that build a life.