Olivia Munn may be in the midst of an alleged feud with her boyfriend Aaron Rodgers' family, but that hasn't stopped her career from booming and recently, she has been busy promoting her latest film, Office Christmas Party.

Most recently, Munn was seen in New York City the day after her boyfriend's team, the Green Bay Packers, secured a victory over the Houston Texans.

"She is clearly a fan of the knee high suede boot. And Ms. Olivia Munn certainly showed her love for the accessory as she stepped out in not one but two variations on the racy footwear on Tuesday," the Daily Mail revealed to readers on Tuesday. "The 36-year-old actress was on the promo trail in New York, which included a stop at the Good Morning America studios."

Munn began dating Rodgers in 2014 and ever since, he has reportedly been estranged from his brother, Jordan Rodgers, and his family. As fans of The Bachelorette may recall, Jordan Rodgers won the heart of Jojo Fletcher during the series' most recent season and soon, the couple is expected to wed.

After Rodgers' father, Ed, was seen discussing their estrangement on the show, a source spoke out against Munn, claiming she was in the middle of their family drama.

Munn "has a strong personality and every meeting she has had with them has gone badly,” a source revealed to Us Weekly in August. “The family says Aaron stopped talking to them... while Aaron says they don’t talk because his family doesn’t like Olivia.

In response to the magazine report, a Munn source insisted, “Aaron makes his own decisions and wouldn’t be swayed by Olivia.” 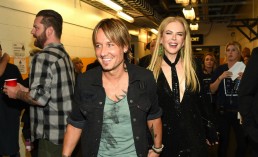 Keith Urban, Nicole Kidman Married: Singer Maintains He & His Wife 'Don't Like To Be Apart' Ahead Of Holidays [VIDEO]