R. Kelly failed to lure a woman into his cult after meeting her backstage during one of his concerts.

During his performance, one of R. Kelly's crew members spotted the young female and offered her a wristband to meet him backstage. The unknown woman, 20, was ecstatic and agreed to meet the 49-year-old performer.

She took to social media to express her excitement.

"When the guy on stage give you a wrist band to go backstage and hang with R Kelly after the show," she wrote in the caption of a photo of her wristband.

After communicating for quite some time, the singer offered the 20-year-old a large amount of cash and assistance to help start her career as an actress and model.

The woman told TMZ that the R&B singer gave her his number and promised he would make her famous. She also mentioned that he invited her to his house in Georgia and requested her to wear "something sexy."

She brought a friend with her because she did not feel too comfortable going alone. Apparently, no phones were allowed and she was escorted into R. Kelly's bedroom. She described the experience to be "really creepy."

The Trapped in the Closet artist asked her to pose and strut like a model while convincing her to take seductive photos. He gave her an allowance of $200 and asked her to buy lingerie, makeup and heels so that she would be prepared for her next visit.

She returned to his house at least two more times and followed his requests. However, she did not bring a friend during her recent visits and she said he became more "controlling" and "aggressive." She claims he even "guilted" her into posing nude and that they never engaged in any kind of sexual intercourse.

The young woman finally had enough. When the Ignition singer offered to fly her out to Los Angeles, she told her mother and cut off all means of communication with the artist. 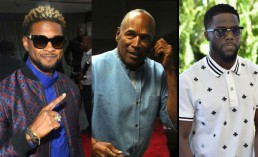